These People Are Truly Sick Of Ed Sheeran's 'Galway Girl' 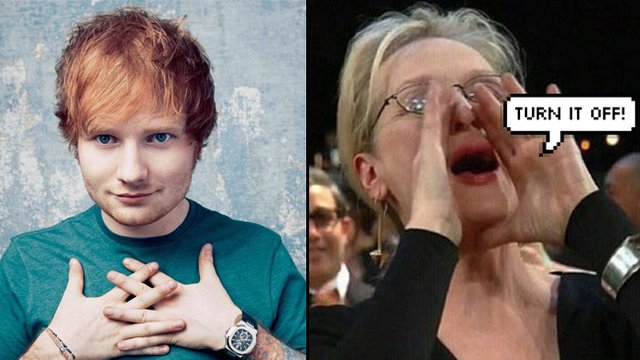 Sadly, not everyone loves Ed's Irish banger as much as we do...

It's the Number 1 song in the country and, at least in this writer's opinion, the best song Ed Sheeran has ever written. But, tragically, not everyone is feeling the majesty of Ireland's new national anthem 'Galway Girl'.

Me: TURN THAT OFF pic.twitter.com/ThFigd8A4p

And while we admit that after St Patrick's Day we have been hearing this tune EVERYWHERE, we still just cannot bring ourselves to hate on its cheery, rap-jig mastery. It's the 'Danny Bhoy' of our generation but with more beatboxing, doritos references and tales of mild alcoholism.

But, hey, at least the people who hate it are making us laugh with their savage anti-Sheeran memes. Here are just a handful of our favourites.

1) This person who can't get over the past:

2) This person who is gonna have to cut back on going out:

3) This person who hates people:

'Galway girl' is the reason art is dead. It's almost a joke how bad that song is. I hate people.

4) This person who is going to extremes:

ddint think i could hate him anymore, but that Galway Girl is an absolute shocker of a record pic.twitter.com/nlVUzxF1ke

5) This person reflecting on the good old days:

Me, remembering being young: I will keep an open mind and not hate on the kids' music.
Me, being honest: "Galway Girl" is an awful song.

6) This person with a theory:

#EdSheeran is basically the first artist to chart based on hate listens #galwaygirl pic.twitter.com/x8kCfaSsAj

7) This person who ain't feeling any singles:

Galway Girl is even worst than Shape of You. pic.twitter.com/SvyxbybHHO

8) This person who has spotted a major error:

So Ed Sheeran- Galway girl is about a girl from limerick, and is set in Dublin pic.twitter.com/Vp9fPXJtrd

9) This person who fears there is more to come:

Me: there's no way I could possibly hate Galway Girl & everything even vaguely associated with that song even more
Ed Sheeran: hold my Coors

galway girl, idk what to say about this one other than i hate it akfjdjaks -1/5 tbh

'Galway Girl' is available on iTunes and playing on the radio/in the shop down the road/your head right now.