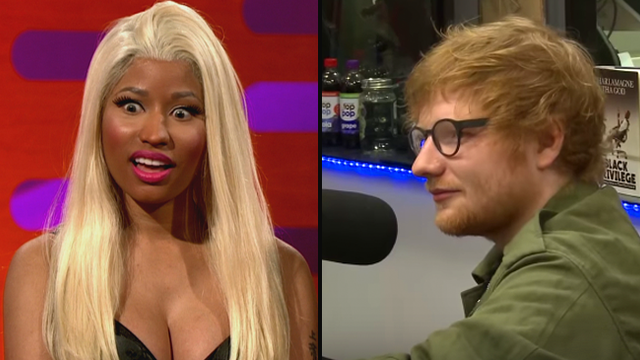 Remember when ol' Teddy said Adele was his only competition? And that his one aim in life was to outsell and out do her. Well, he's already failed because he stopped by a hip-hop radio station in the US a few days ago and they asked him to rap Nicki Minaj's iconic verse from 'Monster' and he failed ~spectacularly~. (If you recall, Adele did NOT fail spectacularly. In fact, she did THAT.)

Ed, the self proclaimed "hip-hop head", popped in to The Breakfast Club at Power 105.1 FM in New York and got chatting about Nicki Minaj and Remy Ma's recent beef. He then goes on to say that he loves Nicki's music (same) and every time 'Monster' comes on he knows all the words.

So obviously, they put him on the spot... and he CHOKED.

OMG, imagine hyping yourself up like that only to forget all the words when your big moment arrives. Looks like Adele will live to fight another day.

Nicki caught the clip and sent her praise but you and I both low-key know that was more of a pity "great job" instead of a "YASSSS B"! :(

We get it, Ed. Too much pressure, being put on the spot, a few too many shots at this time of the morning - it's all a bit much isn't it, my precious boy? But then again, if a 13 year old girl can nail every single word, then you've got no excuse babes.