WATCH: Ed Sheeran's Nan Listened To 'Nancy Mulligan' For The First Time And Her Reaction Is So Unexpected 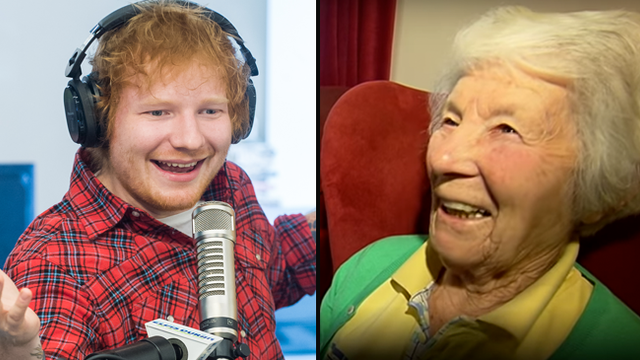 He wrote the song about her but is she a fan?

As you probably know by now, Ed's album features a couple of songs about his grandparents. There's the devastatingly sad 'Supermarket Flowers' and then another one called 'Nancy Mulligan'.

They're both about his Nan but... spoiler alert: they're not about the ~same~ Nan. While 'Supermarket Flowers' was written about his mum's mum who recently passed, 'Nancy Mulligan' is about his dad's mum and she just recently was caught on camera listening to absolute banger than Ed wrote about the true story of her and his grandad William Sheeran. *cries*

And by 'caught on camera listening to', we mean she was visited and interviewed by Ireland's RTE news and they played the song for her. Obviously, there's no secret cameras in Ed Sheeran's now famous Nan's house. Christ.

ANYWAY - Nancy (or Anne), for whom the song is named after, didn't exactly have a ~thrilling~ reaction when she heard the song and it's actually hilarious.

What was that she said? "It's fine. As long as I'm not the one playing it." IT'S 'FINE'!? Nancy, come on! Only joking, we're sure she loved it really.

All those in favour of hitting play on 'Galway Girl' on Granny Nancy's iPod and showing her what a real party looks like say 'Aye!'