Fall Out Boy's 'MANIA': Everything We Know So Far 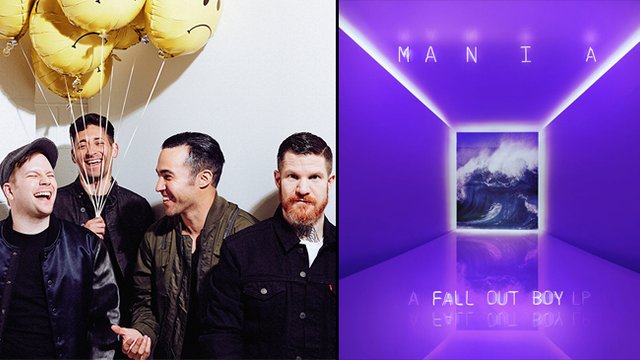 Who are they working with, what will it sound like and more details on FOB's grand return to the spotlight.

Fall Out Boy's seventh (!) studio album MANIA is imminent, dropping on January 19th after being delayed from its original September 15th release, and we are already beside ourselves with excitement. Pete recently revealed in an interview that the sessions are completed and that the album is now in the mixing stage. But what exactly can we expect from Patrick, Pete, Joe & Andy's latest opus.

Well, we did some sleuthing and have rounded up all the info on just what could be coming very soon from Chicago's finest.

Fall Out Boy just revealed their full tracklist in a tweet dropped out of nowhere, with a link to a hilarious url (ismaniadoneyet.com - true kings of seo). Without further ado... HERE THEY ARE:

The songs/tracklisting for MANIA is currently listed as:

5. Last Of The Real Ones

Aside from the singles 'Young & Menace', 'Champion' and 'The Last Of The Real Ones', not too much has been given away about what to expect from the full record in terms of sound.

But, in a new chat with Kerrang magazine (August 31st), the band revealed some more details about the demo tracks they have been working on for the record. Exciting!

'Expensive Mistakes' (described as a rock song with a 'Centuries' vibe to it and includes the wonderfully emo chorus lyric 'I'll stop wearing black when they make another colour').

'Heaven's Gate' (a ballad, described as being a 'unicorn song' by Pete with a title that may be referencing the infamously murderous San Diego cult of the same name).

Hopefully, we'll get at least one more single drop before the big release in January too. Fingers crossed.

Pete spoke to Rock Sound a few months back where he revealed some initial details about working on the record and how it will differ from the electronic sound of 'Young & Menace':

"Doing an album full of that would be a little hard for people to process, but at the same time we always update the software. I think we could put it on cruise control and kind of put out whatever and tour when we felt like it, and it could just be a job and it’d be fine, but it’s much less interesting. Because then if you’re going to do that, then there’s a lot of jobs that are a lot easier to do, so why not keep it interesting? That’s kind of the driving force behind the album."

Time will tell just which genres from their ever-growing arsenal the boys have decided to tick off this time around.

Although one thing we apparently won't be hearing is any of the older sessions as the songs that were lined up for the album originally have now been scrapped according to the Rock Sound podcast:

"I don't think that people will hear anything else from the original 'M A  N   I    A' sessions, maybe you'll get a melody or a couple lyrics or something, but for the most part it's all scrapped."

But, seeing as 'The Last Of The Real Ones' came from the new session, we can be sure that keeping it fresh was a good decision.

3) Who have they been working with?

Jesse Shatkin, who has previously worked with the likes of Linkin Park, is behind the desk with Pete and Patrick listed as exec producers. Plus, Sia is credited as a co-writer on 'Champion' so perhaps there are some more songs from their session together on the final record. No confirmation on other collaborators just yet but, when we questioned Panic! At The Disco's Brendon Urie on the subject, he certainly didn't say no. Fingers crossed for that long awaited '20 Dollar Nose Bleed' sequel.

The boys are hitting the US this Autumn and Australia and New Zealand early next year. We are, however, still waiting on those elusive UK dates. Come through Pete, don't leave us hanging.

We'll bring you all the info on the FOB album as it becomes available.