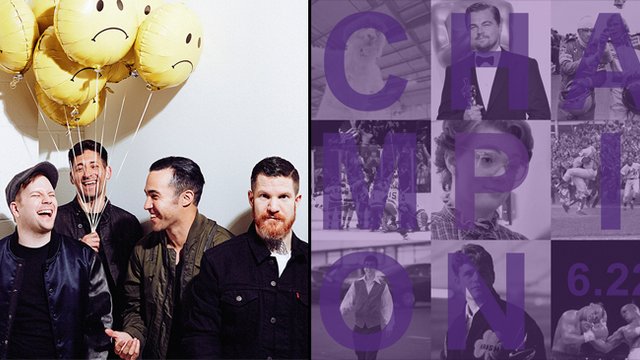 The FOB boys announced their new single with a cryptic piece of artwork - but just who are all those people?

Fall Out Boy are back once again with 'Champion', the second single from upcoming album MANIA, set to drop this Thursday (June 22nd).

The band teased the release by posting some new artwork on their social media channels featuring a series of famous and familiar faces:

So, who is all that lot then?

Well, as far as we can see, the lineup includes such Champions as...

- The 1980 US Olympic Ice Hockey Team known for their 'miracle on ice' match.

- McLovin, the comedy sidekick from the movie Superbad.

But most intriguing of all is that shot in the top left of the llama previously seen in the video for 'Young & Menace'. Who could possibly be inside that ridiculous outfit?

Remember, he didn't rule out an appearance on the album when we chatted to him. Could this track be the collab we are all waiting for? Time will tell...

MANIA will be released on September 15th. The band will embark on a US arena tour this autumn.