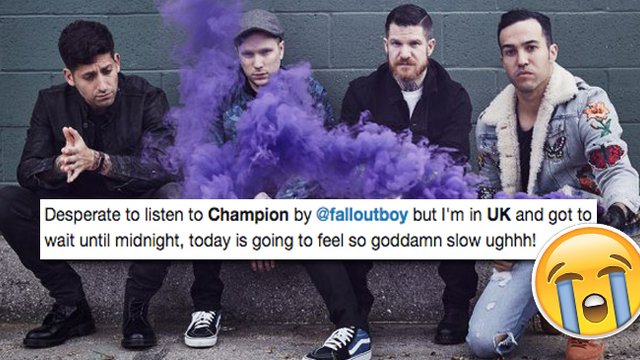 Sorry UK - we ain't getting this one for a few more hours. Why must you keep us waiting Pete? Why?!?

Fall Out Boy have been teasing us for ages about a second single from their upcoming album MANIA, finally confirming this week that it is called 'Champion' and would drop today (June 22nd).

Well, here we are in London on a sunny Thursday morning and sadly our Spotify homepage looks a bit like this:

@falloutboy Excuse me UK Spotify...this is a matter of life or death thank you very much #Champion pic.twitter.com/CTCJiox2GW

Yes sadly, while the track has debuted on US platforms, many international fans are still waiting impatiently for FOB's latest banger to appear. And they ain't too happy about it.

Desperate to listen to Champion by @falloutboy but I'm in UK and got to wait until midnight, today is going to feel so goddamn slow ughhh!

@falloutboy I get my final university grades today, if I pass can you release #champion to the uk sooner?

Seriously Pete, help a dude out would ya?

But, hey at least we aren't alone - our Aussie friends appear to be having the exact same problem:

Waiting for #champion to come out in Australia like @falloutboy pic.twitter.com/yiCqItugKs

Of course, for any fans in a similar position to us right now, there are many highly illegal versions swimming around the darkest edges of the web but, my pop punk loving friends, do not be tempted - they will be crappy quality and the boys won't make cash off it. How is Patrick supposed to afford all those fancy hats if you don't use official streaming sites?

No, sadly we will just have to wait FOB-less until at least midnight. But, as the lyrics go, "if I can get through this, I can do anything!"

Pass the cereal, it's gonna be a while.