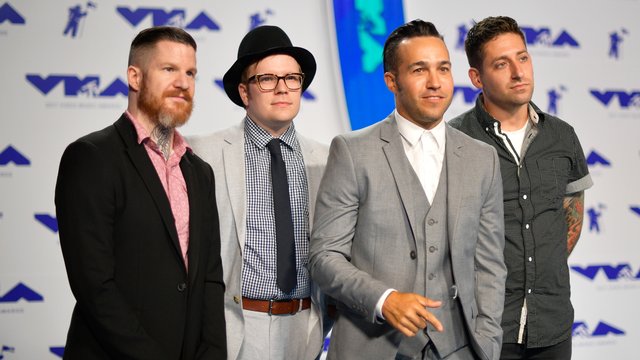 The band performed 'Expensive Mistakes' alongside some old classics and a solo piano version of 'Young & Menace' on the opening dates of the 'MANIA' tour.

Fall Out Boy kicked off the opening dates of their MANIA tour in the US last week and treated the lucky fans in attendance to a brand new song from the delayed album due out in January.

Entitled 'Expensive Mistakes', the mid-tempo rock track has an almost 'Save Rock 'n' Roll' style quality to the chorus with a electronic beat reminiscent of Bran Van 3000's classic 90s jam 'Drinkin' In LA'. As previously reported, this is also the song that features the iconic emo lyric 'I'll stop wearing black when they make a darker colour'. Somebody put that on a t-shirt, quick.

In fact, as one fan spotted, it's actually quote from The Addams Family. Just in time for Halloween.

Check out fan-shot footage of 'Expensive Mistakes', performed during the 'B Stage' section of the gig, in the videos below:

Elsewhere in the set, the band have been performing recent singles 'The Last Of The Real Ones' and 'Champion' as well as a stripped-back, piano only version of 'Young & Menace' led by Patrick:

Old classics including 'I Don't Care', 'Grand Theft Autumn' and 'Saturday' are also being performed, all accompanied by dramatic video backdrops, including 'Centuries' which is paired with footage of NFL players taking a knee during the US National anthem as part of the recent protest movement:

FOB will continue on their tour of the US throughout the Autumn before heading to Australia and New Zealand with some intimate European dates lined up for early 2018. The album, MANIA, is due for release on January 19th.