The full music video for the 'MANIA' single is set to drop soon with more surprises still in store...

Fall Out Boy have finally revealed some more details about the music video for their banger of a new single 'Champion' confirming a drop date of 12am EST on July 28th.

But wait, there's more as the band put out a short teaser clip on Twitter featuring none other than Mr Jaden Smith: 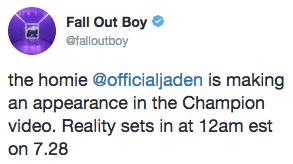 Check out the video by clicking at the top of the page.

(Great acting all round btw guys, especially you Pete. It's like we were watching One Tree Hill again for a second).

Plus, apparently there are more suprises still in store:

Hmm, is that dude in the llama suit someone equally famous?

FOB's new album MANIA is due for release on September 15th with a full US arena tour following throughout the Autumn.