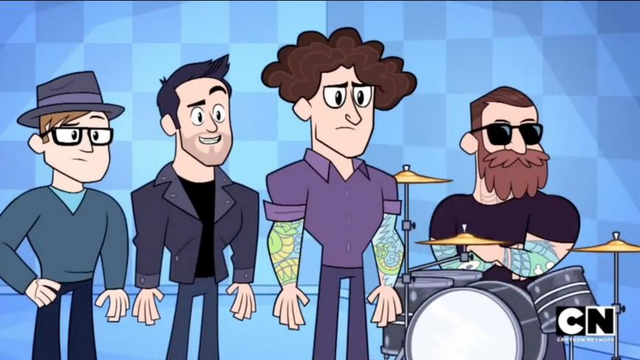 Patrick, Pete, Andy and Joe hang out with Robin and the team in a hilarious animated cameo.

Fall Out Boy have voiced a cameo in the animated superhero series Teen Titans which premiered on Cartoon Network earlier this week.

This was a fun one... find out what happens during our appearance on #TeenTitansGo + watch on https://t.co/z9QmW43NvO pic.twitter.com/kQPfgheY9K

The band, currently promoting their upcoming new album MANIA, have a chat with Robin and co in the scene set in a recording studio and includes the wonderful bonus detail of having Pete wish he could be a giant robot. Bless him.

This isn't the band's first brush with the world of animation, Patrick having previously voiced a character in Disney show Star Vs. The Forces Of Evil. He'll also soon be reportedly popping up in a new movie about Gnomes. So there ya go.

Check out FOB's cameo in Teen Titans Go in the clip below:

FOB recently unveiled their very good new single 'Champion' and will head out on a US arena tour throughout the Autumn.