Fall Out Boy Have Been Accused Of “Copying” The 1975, But What Do You Think? 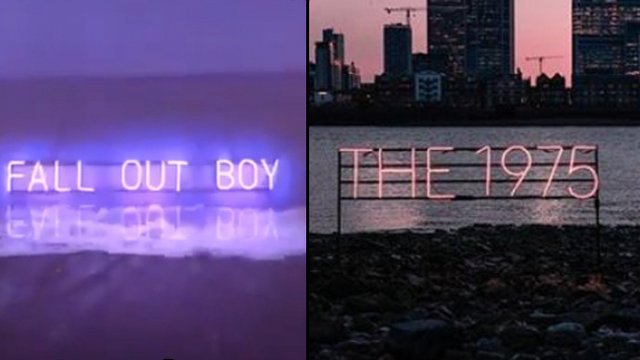 The internet is torn over FOB's new video - but can you really be accused of copying neon?

Fall Out Boy have revealed their new album will be titled Mania, out on September 15th and with this image as the cover:

Lovely but again, anyone notice any similarities?

Why @falloutboy looking like a Kmart version of @the1975 ??? pic.twitter.com/nQJW2obOAR

Fall Out Boy announced their return (sort of) late last week with a cryptic video clip screening in cinemas around the Chicago area, promising more info arriving on April 28th.

Everyone got so excited about this purple era that Pete Wentz has even moved the big announcement (Is it a single? Or an album?) up a day so we will find out what's going on this Thursday (April 27th).

Basically, its a lovely clip but does that end bit look a tad familiar to you?

You know, this bit:

And we all know who invented neon don't we... All joking aside though, fans were very quick to point out the obvious comparison between Fall Out Boy's sign and the promo album campaign for The 1975's ridiculously brilliant but ridiculously titled second album I Like It When You Sleep For You Are So Beautiful Yet So Unaware Of It.

Fall Out Boy: "Hey can I copy your homework?"

Nothing against fall out boy, but they stole the 1975's album promo...

But, there were also many fans who don't see what all the fuss is about:

"fall out boy was never relevant", says someone who stans The 1975-

Hey, at least the memes are all original.

This isn't the first time that type of neon signage has been adopted in other places with the likes of Zara Larsson and even the UK government making slogans in a similar style, much to the annoyance of Matty Healy and The 1975's manager Jamie Oborne who called them out on Twitter.

So, is FOB's latest sign fair game? To be fair to them, this is just a promo of something bigger to come - the final product may not even make use of these types of signs.

Plus, many have pointed out that, obviously, The 1975 don't own neon lighting. However, the styling of the words, placed against a seaside backdrop, is undoubtedly similar. Then again, whenever something has impact in pop culture, people will imitate and expand on it. The 1975 could be seen as trendsetters in this regard (although, given how annoyed they've been about this stuff in the past, we doubt Matty and the boys will see it that way).

What do you think? Should The 1975 be annoyed by this new FOB video? Is this whole argument just silly? Let us know your thoughts.