WATCH: Fall Out Boy Perform 'Young & Menace' For The First Time Ever 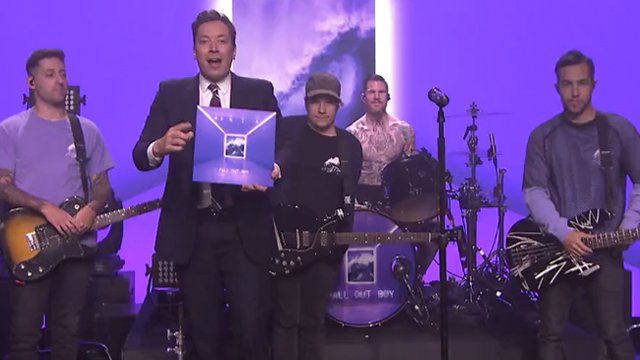 The band also played a backstage game during their recent visit to 'The Tonight Show Starring Jimmy Fallon'.

Fall Out Boy gave their debut live performance of their new single 'Young & Menace' last night (May 16th) during an appearance on The Tonight Show.

Taken from their upcoming album MANIA, the track has a much harder edge when played live with lead singer Patrick Stump even singing the title over the top of the now infamous electronic sounds of the recorded version.

The single split opinion among fans upon release but the accompanying video, featuring a group of purple llamas (one of which might be played by Brendon Urie) has already inspired endless fan art and poster designs.

Fall Out Boy will also head out on a HUGE US tour later this year with Europe and other territories expected to be announced shortly.

Check out FOB's TV debut of Young & Menace below:

Plus, the band also played a game of 'Band Superlatives' while hanging out backstage.

You can watch the game in the video below: