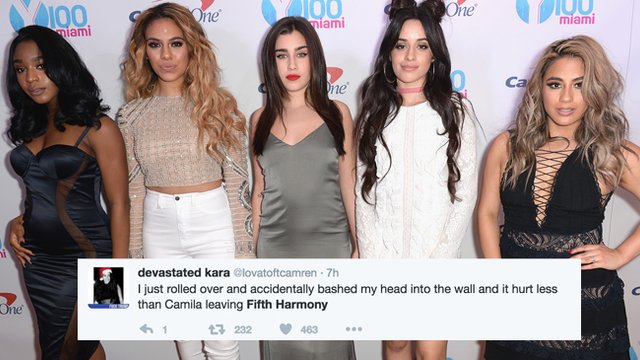 When it was announced that Camila Cabello was leaving Fifth Harmony most fans were wondering not why, but why did it take so long?

It's no secret that the girls weren't exactly the best of friends. And if you need any proof, then just take a look at these memes, gifs and video clips. Brace yourself.

1. The writings were on the wall.

If only there were some signs leading up to this moment. pic.twitter.com/zUxXWGDotE

When you listen to a Fifth Harmony song & Camila's part comes on pic.twitter.com/A0Wvfk8Gd2

3. Leave Zayn out of this okay?

4. And do not even mention Beyoncé's name right now unless you want a good dragging by the Beyhive.

"Camila Cabello is officially the next Beyoncé" pic.twitter.com/0j8z0a7v2J

Wow Camila Cabello leaving Fifth Harmony means y'all are gonna get a full solo career of this. Great. pic.twitter.com/26h3GlpfHi

We all know who conviced Camila Cabello of leaving and also wrote the post of 5H becoming Fourth Harmony. pic.twitter.com/KWuVEsacLR

I can't wait for the tell-all books they're all gonna write someday pic.twitter.com/Ae97uyh6v4

8. I am literally writing this via my representatives.

"Via her representives" an iconic quote that will go down in history for the ages - (Normani, Lauren, Dinah and Ally)

When your favorite song is playing at the club and the DJ starts talking over it pic.twitter.com/jKwVjlPAx3

"How do you feel about Camila leaving fifth harmony?" https://t.co/41DOLVQSXn

14. As a fan of 'Holler' I find this meme very offensive.

Don't worry Fifth Harmony fans, everything will be fi- pic.twitter.com/Cg29LOSM1X

15. Are we going with Fourth Harmony now?