#CamilaIsOverParty Is Trending And The Internet Has Mixed Feelings 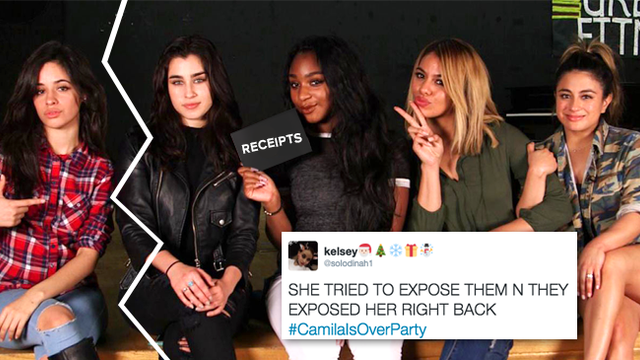 This is way too petty for a Tuesday morning.

We've been to a lot of Twitter parties in 2016, haven't we? There was the #TheCliqueIsGoingToJailParty, then the #KimExposedTaylorParty and far too many #KanyeIsOver themed parties to count. But this year couldn't resist squeezing in another hashtag soiree before the clock striked midnight on December 31st.

In case you missed it, Camila Cabello has left Fifth Harmony. Wordy statements have been throw across each of their social media networks and each new explanation seems to contradict the first. So, when the remaining band members (Ally, Dinah, Lauren and Normani) released their final statement earlier today (Dec 20.), it became clear that Camila's initial explanation was not all that it seemed - and it's just started a civil war amongst the Harmonizers.

After Camila's actions were 'exposed' by the rest of the group, the hashtag #CamilaIsOverParty began trending on Twitter.

SHE TRIED TO EXPOSE THEM N THEY EXPOSED HER RIGHT BACK #CamilaIsOverParty pic.twitter.com/fTrmbMdHLP

While some were absolutely fuming, others just couldn't make sense of the confusing back and forth situation.

Camila: We've had long convos about the future of 5h.
5h: We tried talking to her but she refused.#Camilaisoverparty #freefifthharmony pic.twitter.com/G0ikng8IFZ

How did it go from "we were just informed" to "we have known for a month" within a few hours? #FreeFifthHarmony #CamilaIsOverParty pic.twitter.com/6Yvz0FbaUE

I'm more confused now than ever. There are two completely opposite stories rn so someone has to be lying #fifthharmony #camilaisoverparty

And the remainder were absolutely disgusted with the way the fans were treating Camila after leaving the group.

5 days ago yall were fans of her and now you're hating on her??!? Who's the real snake here#CamilaIsOverParty

#CamilaIsOverparty ?! WTF is this? Are yall in ur right mind? We dont even know THE REAL FUCKING STORY and ya'll judging. Stop

Whatever is going on, we hope there's no bad blood between the group or the fans. They did after all - all five of them at that - produce one of the GREATEST songs ever made.