WATCH: Fifth Harmony Perform Without Camila For The First Time And Absolutely SLAY It 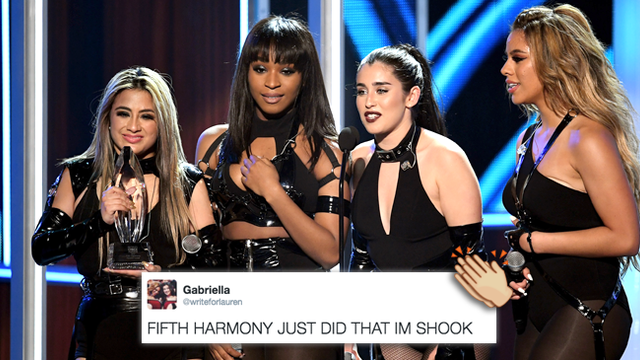 They even changed the lyrics to 'Work From Home' too.

The moment you've all been waiting for finally happened last night (Jan 18) at the People's Choice Awards. Fifth Harmony performed for the very first time without Camila Cabello and spoiler alert: it might have been their best performance EVER.

Let's face it, as much we stan for Camila, Lauren, Normani, Ally and Dinah Jane individually and together as a record-breaking girl band, we can all agree that their previous performances had been a bit hit and miss.

Ever since Camila left to slay the solo scene, we were all left wondering how the group would survive without her. The remaining four girls took to the stage at the PCAs to perform the second best song of 2016 'Work From Home', with each member filling in for Camila's vocals and every changing the lyrics.

Watch the brilliant performance below and listen for the lyric change below:

Did you catch it? "WE ain't worried bout nuthin', WE ain't worried bout nada." Iconic. And then there's Lauren slaying Camila's verse. No one trying any overpowering vocal runs. CHOREOGRAPHY FOR DAYS! Wow, what a way to silence the doubters. The group then went on to be presented with the 'Favourite Group' award, beating Twenty One Pilots and Panic! At The Disco.

Lauren Jauregui singing Camila's verse in Work From Home is all I ever needed in my life that I didn't even know. Fifth Harmony will rise

Camila was an original member of the group & will be missed,, but #FifthHarmony just proved they're going to slay with or without her

they ALL filled in Camila's parts. They didn't try and 'out - sing' eachother. This is what a girl group should be like. #fifthharmony

omg i just watched @FifthHarmony's PCAs performance. first time seeing them as a quartet and I'm LIVING. that was everything, cmon ladies

Don't even front like @LaurenJauregui didn't have y'all shook with that first verse! All kinds of yes! #PCAs2017 #fifthharmony