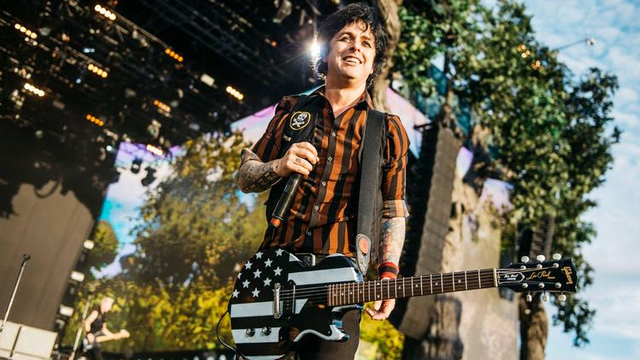 Could California's finest bring the scene to their posh gig in the park? Of course they could!

Green Day, the all-conquering stadium kings of pop punk, tore into London this weekend (July 1st) with a headline performance at the British SummerTime Festival in the city's Hyde Park, hitting an incredibly posh setting with the biggest sounding riffs this side of 1994.

But just how pop punk was this show? How punk can you really get when you are playing to 65,000 people in the Queen's back garden?

Well, the answer is "very pop punk indeed thank you very much". In fact, we have rounded up the 21 most pop punk sights of the day to give you the full lowdown of just what happened when Billie, Mike and Tré hit foggy old London town:

1) These kids camped out from the minute gates opened until the main act appear on stage 7 hours later.

Ok, hands up who else is here @bsthydepark today for @greenday pic.twitter.com/Ya1vQJNuhz

Now that is real dedication.

2) The weather suddenly got blazing hot around lunch but, fortunately for this crowd, we were all wearing knee length baggy shorts and converse anyway. With a hoodie just in case it gets chilly later.

3) The list of support acts is utterly on point - Rancid, SWMRS, The Stranglers, The Hives, Gogol Bordello - we could go on but basically, this was a hand-picked, well put together selection of crowd-pleasing punk goodness.

4) A guy spits on the ground next to us but then realises how close he got to my shoe and apologises. Just 'cos we're punk doesn't mean we're not polite.

5) This line for the pizza stand.

Well, it wouldn't be a pop punk gig without @GreenDay #BSTHydePark pic.twitter.com/ZAALTuN9C7

Honestly, it stretched back the length of half the park.

6) There is a sea of black t-shirts across the park today, with little bits of red sunburned skin popping out in between.

It's enough to a bring a tear to your eye.

7) Cutest sight of the day - a full family with three kids under 15 all in matching Green Day outfits and dyed hair. Teaching them right Mum and Dad, well done.

8) This bunny dancing to 'Blitzkrieg Bop'.

The day that Green Day open a show with anything other than a dude in a pink rabbit outfit smacking himself on the arse is the day it is all over.

Now THIS is how you make an entrance @GreenDay #BSTHydePark pic.twitter.com/XQar7nndco

Yes, that is the theme from The Good, The Bad & The Ugly.

10) It's the first song of the set and already there's a superfan pulled up on stage, running around hugging everyone, singing the chorus and doing a stage dive. Oh and he even kissed Billie. In front of 65,000 people. Damn, that's some serious concert goals right there.

11) People still singing along to 'Longview' in the queue for the urinals. Because needing to pee won't stop us partying dammit.

12) The bar ran out of dark fruit cider. Seriously, does any other crowd drink this stuff? There is no way that is a normal thing at any other show.

13) This rather lovely sentiment from Billie Joe Armstrong:

"I don't need any politicians telling me what to think. When I see people singing and dancing together, this is proof. This is the human experience. We come here tonight; we sing together... drink together. This is about freedom."

Proof that punk can be inclusive to all. Good on him.

14) The traditional moment when a crowd member gets pulled up on stage to play with the band, even if this girl did struggle to play three basic chords. She gets to keep the guitar which is pretty damn amazing though. Just don't put it on Ebay or we'll be very dissapointed.

DO YOU HAVE THE @GreenDay #BSTHydePark pic.twitter.com/523x4n0c4S

It's been over 20 years but my god this is still such a banger.

"Thank you so much to all the bands who've played here today. Cos I'm pretty sure it's gonna be better than tomorrow."

For the record, Justin Bieber was headlining the next night. Major burn.

17) When you realise there were like 6 more pizza stands around the park, all with huge lines. Still. The shows nearly done for god's sake.

21) Packed buses and tubes all the way home. At least 60% of people are eating pizza. It's not a coincidence.

The British SummerTime Festival continues this weekend in Hyde Park with performances from Kings Of Leon, The Killers & more.