Read Halsey's Women's March Poem "A Story Like Mine" In Full 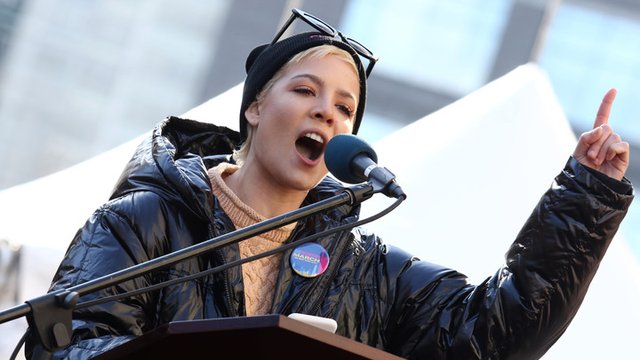 Well known actors and musicians lent their famous voices to women's marches across the United States over the weekend, as many expressed solidarity in the fight for equality.

Halsey, who has been an outspoken feminist for as long as we've known about her, shared a deeply moving poem called "A Story Like Mine" before a New York City crowd. You can watch Halsey's full reading of "A Story Like Mine" and read the poem in its entirety below.

a poem by Halsey

It's 2009 and I'm 14 and I'm crying/
Not really sure where I am/
But I'm holding the hand of my best friend, Sam/
In the waiting room of a planned parenthood/
The air is sterile and clean/
And the walls are that...not grey, but green/
And the lights are so bright they could burn a hole through the seem of my jeans/
And my phone is buzzing in the pocket/
My mom is asking me if I remembered my keys/
'Cause she's closing the door and she needs to lock it/
But I can't tell my mom where I've gone/
I can't tell anyone at all/
You see, my best friend Sam was raped by a man/
That we knew because he worked in the after-school programme/
And he held her down, with her textbooks beside her/
And he covered mouth and then he came inside her/
So, now I'm with Sam/
At the place with the plan/
Waiting for a medical exam/
And she's PRAYING she doesn't need an abortion/
She couldn't afford it/
And her parents would like...totally kill her/

It's 2002/And my family just moved/
And the only people I know are my mom's friend, Sue and her son/
He's got a case of Matchbox cars and he says that he'll teach me to play the guitar...if I just keep quiet/
And the stairwell beside apartment 1245 will haunt me in my sleep for as long as I am alive/
And I'm too young to know why it aches in my thighs, but I must lie, I must lie/

It's 2012 and I'm dating a guy/
And I sleep in his bed/ And I just learned how to drive/
He's older than me/ And he drinks whiskey neat/
And he's paying for everything/ This adult thing...it's not cheap/
We've been fighting a lot/ Almost 10 times a week/
And he wants to have sex/ And I just want to sleep/
But he says I can't so no to him/This much I owe to him/
He buys my dinners/ So I have to blow him/
He's taken to forcing me down on my knees/ And I'm confused because he's hurting me while he says "please"/
And he's only a man and these things he just needs/ He's my boyfriend so why am I filled with unease?/

It's 2017 and I live like a queen/
And I've followed damn near every one of my dreams/
I'm invincible and I'm so fucking naive/
I believe I'm protected 'cause I live on a screen/
Nobody would dare act that way around me/
I've earned my protection, eternally clean/
Until a man that I trust gets his hands in my pants/
But I don't want none of that, I just wanted to dance/
And I wake up the next morning like I'm in a trance/
And there's blood/
Is that my blood?/
Hold on a minute/

You see I've worked every day since I was 18/
I've toured everywhere from Japan to Mar-a-Lago/
I even went on stage that night in Chicago when I was having a miscarriage/
I mean, I pied the piper, I put on a diaper/
And sang out my spleen to a room full of teens/
What do you mean this happened to me?/
You can't put your hands on me/
You don't know what my body has been through/
I'm supposed to be safe now/
I earned it/

It's 2018 and I've realized nobody is safe long as she is alive/
And every friend that I know has a story like mine/
And the world tells me we should take it as a compliment/
But then heroes like Ashley and Simone and Gabby, McKayla and Gaga, Rosario, Aly/
Remind me this is the beginning, it is not the finale/
And that's why we're here/
And that's why we rally/
It's Olympians and a medical resident and not one fucking word from the man who is President/
It's about closed doors and secrets and legs and stilettos/
From the Hollywood hills to the projects in ghettos/
When babies are ripped from the arms of teen mothers and child brides cry globally under the covers/
Who don't have a voice on the magazine covers/
They tell us take cover/

But we are not free until all of us are free/
So love your neighbour, please treat her kindly/
Ask her story and then shut up and listen/
Black, Asian, poor, wealthy, trans, cis, Muslim, Christian/
Listen, listen and then yell at the top of your lungs/
Be a voice for all those who have prisoner tongues/
For the people who had to grow up way too young/
There is work to be done/
There are songs to be sung/
Lord knows there's a war to be won/