Halsey Reveals The True Meaning Behind “Now or Never” 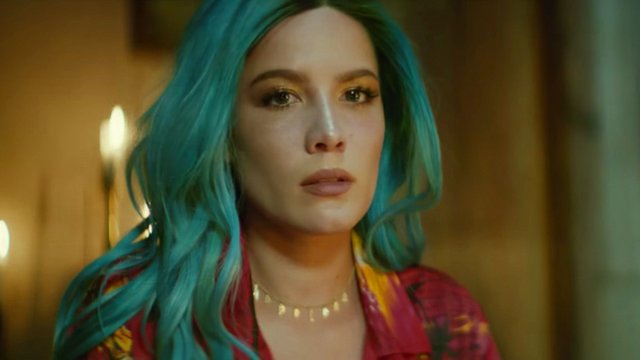 Halsey has revealed how 'Now or Never' fits within the Hopeless Fountain Kingdom album.

After teasing fans for months, Halsey finally came through with her comeback single 'Now or Never' on Tuesday (4 April), taken from her forthcoming second album Hopeless Fountain Kingdom.

'Now or Never' was accompanied by a mini-movie music video which paid homage to Baz Luhrmann's iconic 1996 film, Romeo + Juliet. In fact, the video was Halsey's directorial debut. In the video a fortuneteller reads Halsey's tarot cards but before the psychic can finish she is dragged away and all hell breaks lose. It was fucking epic and we'll fight you if you say otherwise.

But what is the meaning behind the song? Well, Halsey opened up about the lyrics and how they relate to the video and it's the most Halsey thing we've ever read.

"The video for ‘Now Or Never’ (my directorial debut!) is one part in the center of a long narrative that tells the story of two people in love despite the forces trying to keep them apart,” she explained.

"On its own the song is about two impatient young lovers," she continued, "but in the context of the hopeless fountain kingdom universe, the stakes are much higher for these two star-crossed lovers."

Halsey has previously said that the album is about "two people who want to be in love so badly that they're willing to change themselves and in doing so they let the real versions of themselves die". She then described "Now or Never" as "the more optimistic part of the album...It's saying 'I want you, I want this to work but it won't be the end of the world if it doesn't".

It also worth mentioning the clear references to "Hold Me Down" from Badlands on the line, "I want you to hold me down, down down...down forever". Does this mean we'll get more references to Badlands on other new tracks? Almost certainly.

In an interview with iHeartRadio, she explained what was happening behind the scenes as she was writing and recording the song:

“We’d finish the track and then be ready to go, and Blanco [producer Benny Blanco] would be like, ‘Hey, I heard that thing you sang. Are you OK?’ It was kind of like he was hearing a cry for help in what I was singing, which was cool because it made us bond."

Damn, Halsey. Why have you got to hit us in the feels like that? We can't wait to read more into the Hopeless Fountain Kingdom story. We're guessing it won't be long before another song drops and we find even more clues to the story. Hold on to your hats babes, we're in for a wild ride.