WATCH: Halsey Is Speaking Out Against Trump & His Anti-Abortion Rule 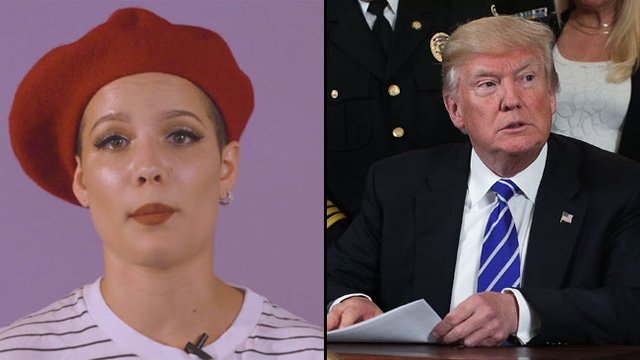 The 'Now Or Never' singer has been very vocal about her support for the Global HER Act and is encouraging fans to do the same.

Halsey has spoken out against the Global Gag Rule in a powerful new video put together in partnership with the Center For Health & Gender Equity.

The Global Gag Rule, as Teen Vogue explains, was recently reinstated by President Donald Trump and "bans international organizations from receiving U.S. funding if they provide, counsel, refer or lobby for abortion services. It's not just a prohibition of using U.S. funding for international abortions (that doesn't happen), it bans these organizations from U.S. funding if they use their own, non-U.S. money for anything related to abortion".

This has, of course, alarmed many women's healthcare organisations in the US, Latanya Mapp Frett, executive director of Planned Parenthood Global, saying in a statement "The world’s most vulnerable women will suffer as a direct result of this policy, which threatens to undermine years of efforts to improve women’s health worldwide".

In the new video, Halsey lists the various ways Women's Healthcare will be affected by the rule, encouraging viewers to show their support  the Global HER Act, a bill recently introduced by Senator Jeanne Shaheen and Representative Nita Lowey which ensures that eligible organizations worldwide can continue providing health services with U.S. funds as well as providing abortion-related services using other non-U.S. funds.

Halsey has been vocal on these issues for a long time, regularly posting links on her social media and encouraging other music figures to join her in the campaign.

Check out Halsey's video by clicking the link below: