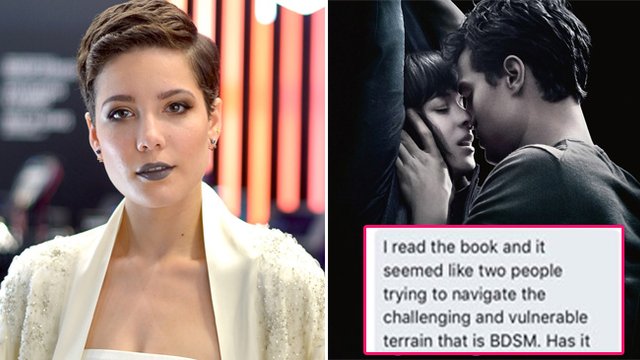 Halsey responded to a fan's concerns over her forthcoming single 'Not Afraid Anymore'...

Halsey has responded to a fan's concerns over her inclusion on the soundtrack to the upcoming 50 Shades Darker movie.

The singer's new single 'Not Afraid Anymore' will be released tomorrow (January 13th), joining the likes of Zayn and Taylor Swift's 'I Don't Wanna Live Forever' and new tracks from Sia and John Legend on the movie's tie-in album.

But one fan on social media expressed concern over Halsey's seeming endorsement of the controversial book and film series, particularly with regards to its sexual politics and the familiar accusations that it promotes abusive relationships.

However, Halsey was happy to justify her association with the franchise, explaining her position in a private message later shared by the Halsey Updates Twitter account.

A well thought out argument and, given the new track's title, perhaps she will be addressing those themes directly in the lyrics? We'll find out tomorrow...

You can check out screenshots of the full Twitter conversation below:

Halsey's second album, rumoured to be titled The Kingdom, is expected to drop at some point in 2017.

What do you guys think of Halsey's comments? Let us know below.