Blackbear Claims Halsey's Album Is About Him & Her Fans Are Pissed 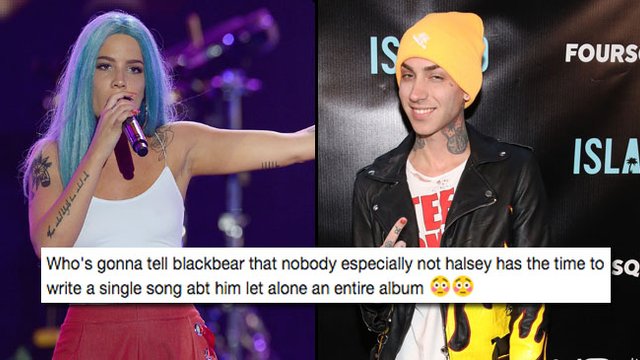 The singer's army of fans were quick to debunk these rumours on social media.

Blackbear is said to have mentioned during a concert last night (June 27th) that he feels the album is about a brief trip he took with the singer to Paris and has even been spotted wearing her merch on stage at shows back in May.

Blackbear:"I spent some time in paris w her & this bitch wrote a whole album about me" Halsey's album isn't about u sweetie, it's about her

blackbear's set at his show... he's wearing a halsey shirt he has her HFK pic up pic.twitter.com/26aA4B2Kcg

Safe to say, the Halsey fandom were not too impressed by his comments:

i love blackbear but boo really thinks halsey wrote an entire album for him pic.twitter.com/uuQWTOJRcg

Why does Blackbear thinks he's so important to Halsey that she would write an entire album about him pic.twitter.com/QYsgBefi8w

Anyway, the Halsey Updates Twitter account was quick to debunk any Blackbear rumours, posting a previous video where the singer explains that the record was actually inspired in part by her relationship with the Norwegian producer Lido:

For those asking about it. This is where h basically confirms that HFK is about Lido. Nice try @iamblackbear pic.twitter.com/rpBcYiP5X3

So yeah, kinda case closed really. Although we are almost certain that this ain't the last we have heard of this argument.

Halsey is soon to embark on a huge arena tour of the US. European dates are expected to follow in early 2018.