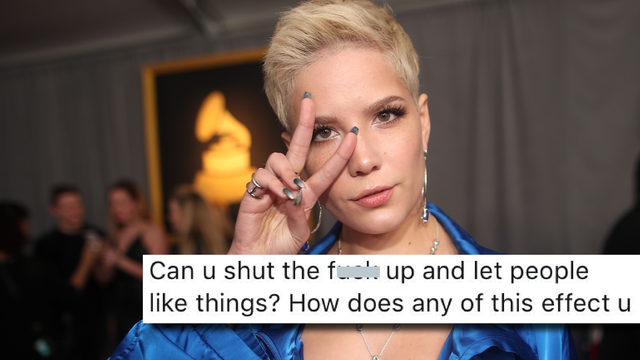 Halsey is no stranger to internet showdowns. The singer cut her teeth online, so it's no surprise when she has to take to social media to defend herself once in a while.

On Saturday (March 4), Halsey got in a bit of a spat with internet personality Christine Sydelko over a shady (now deleted) tweet.

It all started when Christine tweeted "this is the worst" about a recent Halsey event.

Halsey held a listening party for 100 fans so they could chat with the singer and hear the new music she has been working on. Things got pretty emotional for Halsey and her fans and it was reported that they "cried" over the new music.

Christine then deleted the original tweet and sent out a tamer version with the same general sentiment.

Halsey quickly clapped back and let Christine know that she wasn't here for the shady tweets.

Many pointed out that Halsey might have been overreacting but the singer has spoken in the past about how deeply social media affects her. The point also remains that Halsey was being made fun of for holding a special event for her loyal fans.

Christine didn't respond to Halsey's series of tweets but quietly admitted that had been dragged.

tbh I got dragged https://t.co/2z8XxDujo5

And Halsey just squashed it with this lowkey tweet.

In all honesty, life is too short to be so cynical. Sometimes it's nice to enjoy stuff and let other people enjoy stuff. No?