Halsey Just Became The First Female Artist Of 2017 To Get A No.1 Album 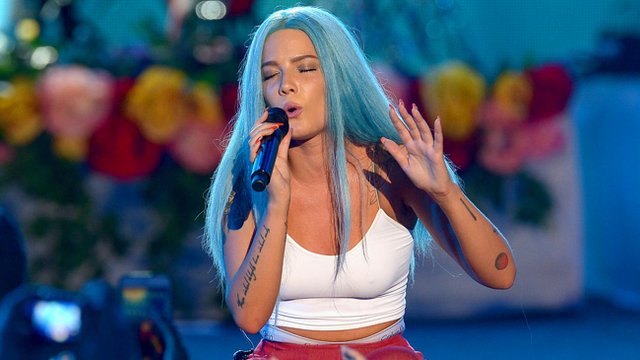 If you needed any further proof that Halsey is about to to become a household name superstar, then look no further than what Hopeless Fountain Kingdom has achieved in its first week of sales.

As reported by Billboard, Halsey's second album Hopeless Fountain Kingdom hit the no.1 spot in the US this weekend, her first album to do so (her previous effort, Badlands, debuted at no.2). The record shifted 106,000 equivalent album units in the week ending June 9, according to Nielsen Music. Of that sum, 76,000 were in traditional album sales. Not too shabby for a record that has had little radio play.

Incredibly, Halsey’s is also the first woman to go to No. 1 on the Billboard 200 in 2017. The last solo lady to top the chart was Lady Gaga with her (much-underrated) fifth album, Joanne, back in November 2016. In fact, in the last 12 months, Halsey is only the fourth solo woman to top the Billboard 200, following Lady Gaga, Solange and Barbra Streisand. In the same time period, 16 men have earned No. 1s. *sigh*

Elsewhere, Halsey hit no.2 in Australia, no.6 in New Zealand and no.7 in Ireland. Unfortunately, she just missed out on the top 10 in the UK, coming in at no.12, which is kinda crazy considering the PopBuzz office has been playing her album on repeat, 24/7, on every device we own - surely that should be enough to take it top 5? Smh.

Halsey took to Instagram to thank her fans after hearing the news:

"ITS OFFICIAL! 1st female album to go #1 on @billboard this year!!!! I can't believe this! I executive produced this album and wrote every single word of it! I remember when I was just stoked to have cool blogs writing about me. I remember spending hours sending my demos to every blog on hypemachine begging them to feature me. (You know who you are if you were on it that early!) I remember playing my first SXSW and just hoping people would like me. I remember sitting down to write this album in one of the lowest points of my life and crying when the words wouldn't come. I have never been happier in my entire life and I can't stop smiling. I will never be able to express my gratitude and everyday I wake up and revel in how awe inspiring this is. Thank you guys for believing in me and making me feel like I'm not alone."

It wasn't that long ago that Halsey was singing songs about Harry Styles and Taylor Swift  on Tumblr and now she's a bonafide pop sensation! Halsey has become one of the most exciting and successful pop stars in the world while being uncompromising in her art and staying true to her values. And that's not even getting into all the other stuff she's done outside of music, especially her advocacy for mental health and LGBTQ rights. It's nothing short of iconic.