Wait, Has Halsey Been Secretly Sharing New Lyrics On Twitter? 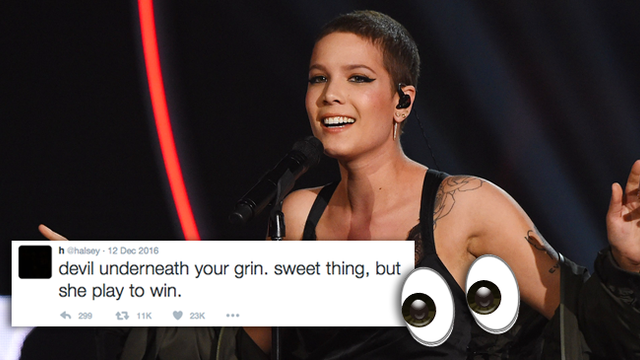 One of our favourite corners of the internet is Halsey's twitter account. If she's not posting fire selfies, she's dragging the patriarchy and standing up for women, the LGBTQ+ community and racial issues. And when she's not doing THAT, she's posting vague statements that sound suspiciously like new lyrics from that new album she's about to drop.

Now, she could just be tweeting out the same kind of existential crap that we're all guilty of - but we KNOW she's months away from blessing us with that second studio album so let's examine the evidence, shall we?

At first glance, we ~all~ thought this was in reference to the the Russian President but... what if it was just a new lyric?

u really puttin me thru it

What about this one? Sounds like a nice catchy song title, huh?

My lover, my liar.

Dreamy visual, references to California. It's a lyric.

look across the valley, see the city lights. like freckles on the face of California.

This one rhymes... definitely a lyric.

devil underneath your grin. sweet thing, but she play to win.

Is this a famous quote? Or is this lyric? Because if it's the latter, it's about to become our favourite lyric of all time.

We're so on the edge about new Halsey music that literally ANYTHING could be lyrics for all we care. This one would make such a good ballad...

Honestly? There's not enough tim tams in a pack.

a spice girls themed pizza place: slice up ur life.

Halsey, babes, we don't want to rush art but... can you drop the album now? The world needs it. Thanks, love you.