Did You Spot The Secret Meaning Behind Halsey’s Jacket At The Nobel Prize Ceremony? 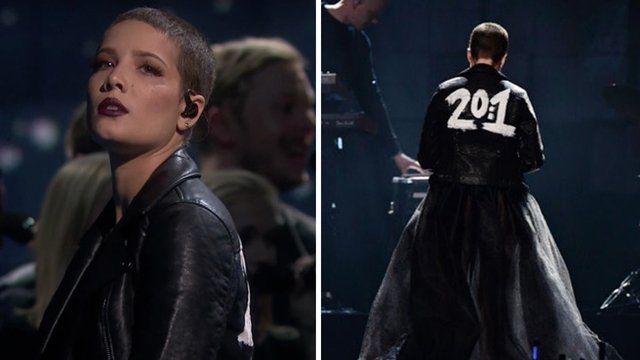 And it's causing some controversy...

You might have noticed that Halsey was invited to perform at the Nobel Prize ceremony last night (Nov 11) in Oslo, Norway. What you might have missed was the secret meaning behind the '20:1' that was written on her jacket.

"The number on this jacket represents the ratio of male to female recipients of the Nobel prize, an award that recognises great achievements in social, creative and scientific fields. An award that this year finds itself belonging to not a single woman. I am honoured to stand on this stage as a voice, and I know the Nobel institution compassionately shares my hope that more women will walk the Nobel stage. So, following my performance I will be making a sizeable donation to foundations that encourage female education. The first step towards peace is optimism. I earnestly implore you to remind the women in your life that they are capable of greatness. Thank you." @nobelpeaceprizeconcert The concert is over but there is much work to be done."

That's kinda ballsy of Halsey to critique the Nobel Prize's record of acknowledging the achievements of women. It's also entirely in character for the outspoken singer.

However, not everyone was happy with Halsey's sartorial choices. One Twitter user questioned whether Halsey was endorsing the idea that women should be given prizes over men who might be more qualified. As Halsey explains, that's not what she was advocating for.

It's not about choosing women over men. It's about giving women the education that gives them the same chance to win https://t.co/2O5ik9Xo0a

It's not that hard a concept to grasp, surely? It's about giving women the same opportunities as men. We applaud Halsey for using her influence in such an inspiring way. Time to step up your game, Nobel Prize!

Also, can we talk about how good this version of 'Castle' sounds? Slay me.