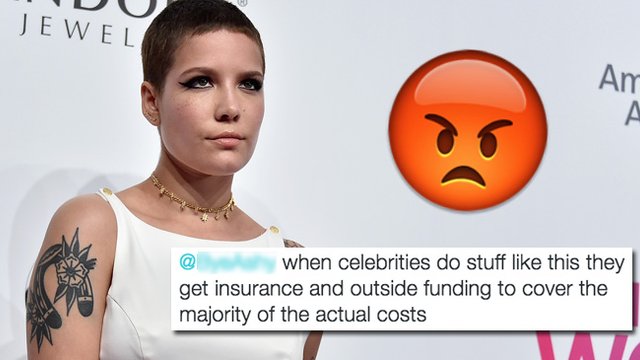 The "Badlands" singer has hit back at critics of her public support for Planned Parenthood.

Halsey has responded passionately to a fan's claim that she would bail out on a charity donation she had promised over Twitter.

The singer was in attendance at the Women's March this past weekend (January 21st) alongside Troye Sivan, Katy Perry and other friends.

She then later pledged to donate to Planned Parenthood, tweeting a message to fans.

in the next 5 hours each RT = $1 donation by me to @PPact. Please read & share on why PP is important for all women. @CecileRichards pic.twitter.com/PEfwIecZ1N

Halsey promised to donate $1 to Planned Parenthood for every RT she received over a 5 hour period up to a value of $100,000, referencing her own struggles with Endometriosis and the importance of women's health information and expertise being readily available to all.

@halsey You saved us. Thanks for being amazing. I couldn't love you more. Such a legend. Such a hero. Our hero

She even encouraged some young activists to make their own donations.

@halsey @shanahnahnah @PPact @CecileRichards I cannot do what you do but I will quadruple my yearly donation to my local Planned Parenthood.

But just in case you somehow thought she wouldn't come through with the cash, Halsey made sure to set one Twitter user straight when they questioned her motives behind the generous move.

@akaMARTIAN @ByeAshy I'm paying this out of my pocket. What authority do you have to speak on celebrities and charitable donations?

Schooled! That guy does indeed have no 'authority' whatsoever.

Planned Parenthood is a women's health organisation that has come under serious fire from the current White House with anti-abortion Republicans said to be aiming to strip the non-profit of any state funding. Just this week, President Trump has signed an executive order which, as Slate reports, bans all "foreign nongovernmental organizations that receive certain kinds of American aid from counseling health clients about abortion or advocating for abortion law liberalization".

Halsey is expected to release her much anticipated second album, rumoured to be titled The Kingdom, later this year.