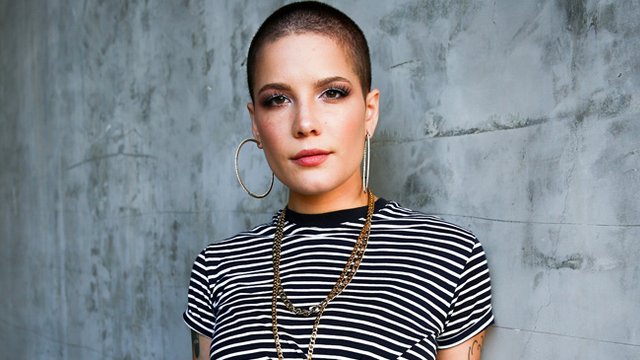 Halsey has spoken many times about being bi-racial yet, as she has said before, not many people know because she is "white passing". And in a new interview with Playboy (which you should definitely check out, even if it's for the photos alone), Halsey makes several interesting points about her experience as a bi-racial woman.

"I’m white-passing. I’ve accepted that about myself and have never tried to control anything about black culture that’s not mine", Halsey explains. "I’m proud to be in a biracial family, I’m proud of who I am, and I’m proud of my hair."

As is typical for a Halsey interview, she doesn't shy away from the more intimate details of her life. "One of my big jokes a long time ago was “I look white, but I still have white boys in my life asking me why my nipples are brown.” Lol!

"Every now and then I experience these racial blips. I look like a white girl, but I don’t feel like one. I’m a black woman. So it’s been weird navigating that. When I was growing up I didn’t know if I was supposed to love TLC or Britney."

Halsey was also asked how people react when they find out she's biracial and she explains that, "White guilt is funny, but this is a really hard time for white allies. People don’t want to do too much but want to do enough, and in my bubble of Los Angeles I’m surrounded by a lot of good people with a lot of good intentions. But as I learned in this past election, my bubble is just a small fraction of how this country operates. That is ultimately my greatest frustration with the public perception of any sort of activism: the mentality of “Well, it’s not affecting me.” Open your fucking eyes."

Elsewhere, Halsey opened up about the miscarriage she had last year. "Every time I read a miscarriage story, it’s about a happily married woman who loses a baby, and that’s fucking terrible and I empathize, but I never read “A 20-year-old girl who’s scared and alone and single had a miscarriage.” And guess what—that happens all around the world every day."

"I wanted to say something about it because when I was going through it, I was fucking alone. I didn’t know any artists I could have called and said, “Hey, I know this happened to you. What should I do? Can I go back on tour? How long did it take for your hormones to realign?” I had no one to talk to."

Read the full interview on Playboy.