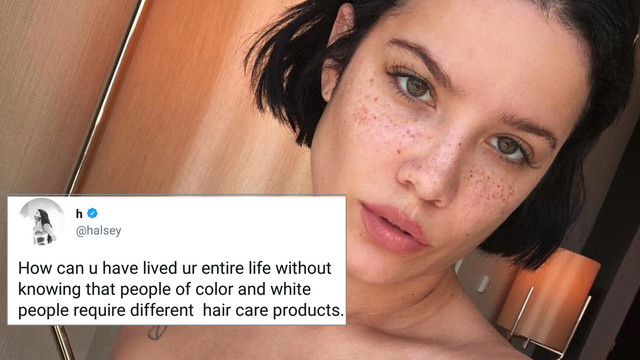 Who knew that this would start SUCH a big debate?

If you've ever travelled, you'll know that having access to the hair care products of your choice can be a little bit of a struggle. Halsey shared her thoughts on the "watered down", perfumed "white people" shampoo that she encounters when travelling, and the internet was majorly divided.

I’ve been traveling for years now and it’s been so frustrating that the hotel toiletry industry entirely alienates people of color. I can’t use this perfumed watered down white people shampoo. Neither can 50% of ur customers. Annoying.

Halsey is of mixed heritage, so she likely uses shampoo formulated for women of colour. The singer explained that the quality of hotel shampoo, which is virtually unusable for some people of colour, leaves those travelling for health or work-related obligations with few options.

The point is that mass production of those products as the standard is part of a greater problem of disenfranchisement. If white ppl can enjoy the luxury/convenience, there should be an option for everyone to. Its an “insignificant” example of a bigger problem. That’s all! https://t.co/gWxHoboXCm

I’m fortunate enough to be financially in a position to do so, but POC traveling frequently for work/medical reasons might not be. Just making a point is all! https://t.co/6u7PWqc1yY

It’s not just hotels. I stayed in a psychiatric hospital as a teenager and they didn’t have hair products for any patients who were POC. It’s hard enough being in there as it is, but then ur gonna too feel ugly and dry n frizzy too? Nah. Anyways. Y’all still missing the point lol

Many people thought that the shampoo issue wasn't a big deal.

You're one of my favorite female artists, but how in the fuck can shampoo be racist lol dumb for this one.

they cannot provide shampoo and conditioner to every single hair type & texture.....purchase your own https://t.co/ofvUWlA4DR

Orrrrrr the shampoo just isn’t great quality because it’s hotel shampoo, and the thicker your hair is, the worse the shampoo is. I have thick, curly hair also, and I’m white. This isn’t a race issue. I’m sure you can afford to buy some better shampoo. Annoying. https://t.co/x0CM6d2FEC

While others agreed with the singer.

how are you not getting this? she not complaining about the quality of the shampoo she's talking about hotels only having generic shampoo that only works for white people and not any shampoo for poc hair. my god its really not that hard to get. and she speaking for all poc.

In some hotels they’re actually really nice and can work for people. For me personally there is 0 way at all. It may seem insignificant to you, but for us it’s one of the many things you see daily that illustrates you’re an odd one out

She’s not saying it to start riots or some shit. You need to remember this is one of the many small things that POC go through that makes them feel like we don’t matter enough to be catered to. It’s a microaggression

Many even shared their own experiences of using hotel shampoo that just didn't do it for them.

I used hotel toiletries once and my hair was so dry I had to call down for olive oil. Only thing it’s good for is stealing and putting in ur house for guests you don’t want staying too long.

I truthfully don’t know a single person who uses hotel shampoo anyway. That shit is wack. Always bringing my own.

Even Halsey was surprised at how much debate her comments had caused.

Who knew me acknowledging that white hair care products are the national standard (while POC are confined to a tiny aisle) would piss so many people off not sorry.

It’s about being made to feel unincluded. Which is, obviously, a far greater problem than shampoo. I never wanna talk about soap ever again lol.

WHEW, who knew a debate about hotel shampoo would get folks so riled up. Whether or not you agree with Halsey, she does have a right to speak on her own experiences.

So, what do you guys think? Should hotels cater more to people with different hair textures or should everyone just bring their own?