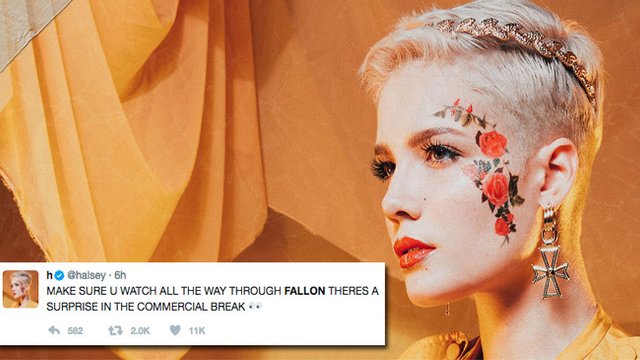 The singer used her latest TV appearance to showcase a brand new trailer for her upcoming tour.

Halsey stopped by The Tonight Show with Jimmy Fallon last night (May 4th) for a performance of her excellent new bop 'Now Or Never' and, safe to say, a good time was had by all.

Seriously though, what a song.

But wait, there's more, because Halsey decided to use the TV opportunity to screen a shiny new commercial for her upcoming US tour in support of the album Hopeless Fountain Kingdom.

And, if you listen closely, you can hear a brief snippit of a brand new song taken from the album, with many fans thinking its the track 'Strangers' featuring a guest vocal from Lauren Jauregi of Fifth Harmony fame.

Halsey discussed the track in detail this week in a new interview with Zane Lowe over on Beats 1 (alongside our old mate Baz), revealing the process behind her decision to write a love song for two women and the positive statement it projects.

Halsey talking about strangers with Zane Lowe on @Beats1 pic.twitter.com/6lc6OslLVJ

Hopeless Fountain Kingdom drops on June 2nd. Halsey returns to the UK this summer to play Glastonbury and Reading and Leeds festivals.