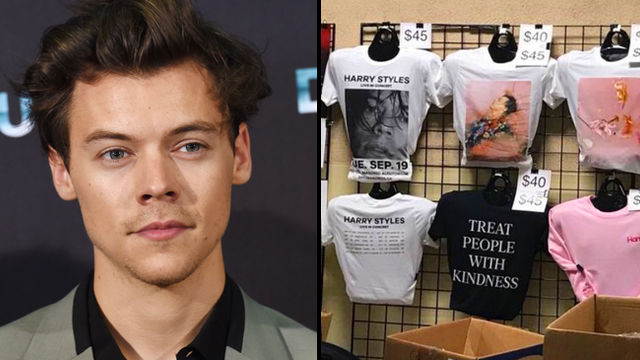 Live Nation have now commented on the pricing mishap and it's all been sorted.

Harry Styles finally kicked off his world tour in San Francisco this week. He treated his fans to a solo rendition of 'What Makes You Beautiful' on the set list, tied a rainbow flag to his microphone stand but it was his merchandise that managed to send everyone into a meltdown.

Fans who attended the show in San Fran shared images of Harry's incredible merch line; hats, sweaters, t-shirts, posters, vinyls - you name it, Harry's got it waiting for you with your name on it. He's even got a shirt that says 'Treat People With Kindness' - um, best merch ever?

OMG THE MERCH FOR HARRY STYLES I WANT EVERYTHING pic.twitter.com/Lb0AC0T34E

But some fans couldn't help but notice a few discrepancies with the price list, particularly when it came to the apparel. According to the information seen on the display at the merch stand, it looked like anyone who wanted a larger sized t-shirt or jumper would be required to pay $5 more...

Fans soon caught wind of the ridiculous price list and started calling out whoever was in charge of the pricing on the blatant discrimination over "plus size" clothing.

man that's so fucked up that the larger sizes cost more... i get that more material costs more, but still it doesn't seem right idk....

Makes sense..I love Harry but I just find it kinda strange cause now bigger fans are gonna feel bad about it whether or not that's the case

Thankfully, it turns out that Harry himself had absolutely nothing to do with the higher pricing on the larger sized merch. There's no WAY he would ever let that happen. Live Nation Merchandising released a statement to Seventeen.com explaining that the whole thing was just a mishap.

"There was a mistake in size pricing at last night’s show, Harry and his team were unaware and this has now been rectified.”