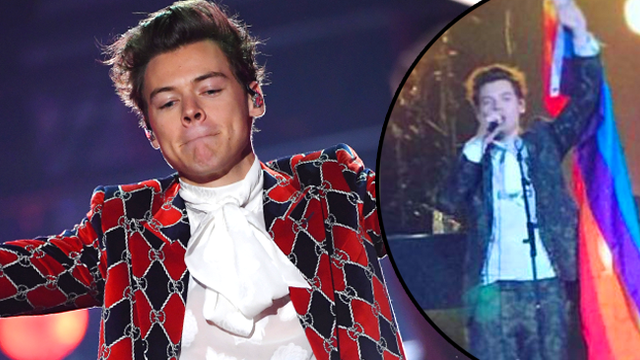 "Thank you for tonight. It’s a moment I will never forget."

BREAKING NEWS: Harry Styles continues to be a perfect human being while on his first solo tour in the US.

If you've been paying attention to Harry's tour so far, you'll know that the rainbow flag has been one of the main visual features alongside his incredible suits and wholesome merch. In fact, we're pretty sure he's been spotted with a flag on every single date he's played so far and fans are now latching onto the trend by bringing their own.

But sadly, according to one fan who went to his concert in Nashville, her own rainbow flag was confiscated when she went through the standard bag search before going into the auditorium. But it was Harry's response to the incident that fans are absolutely losing their minds over...

He reportedly found the flag and brought it on stage to gave back to her, in front of the entire crowd.

Brittney's caption reads: "For those of you who are curious about what happened: I was going through security and I had my flag in my bag. There was a man there and he pulled it out and shook his head. “No flags. This is just a friendly confiscation.” He didn’t give me any reasoning what so ever. That was literally /my/ fucking pride. It made me upset."

Brittney then explained that the security guard "proceeded to throw [the flag] under the table as if it meant nothing." (According to various fans in the comments, it's common practice for large flags to be confiscated by security to avoid obstructed views in the crowd.)

"I have three witnesses. So I go in and there’s at least 12 other people that are just freely wearing there flags?? I was so lost and honestly hurt. That flag meant everything to me and I had it hung up on the wall forever. It was a part of me."

"And then the legend that is Harry styles came out with it at the end and starting talking and said “I heard this was removed, so I brought it back.” He brought out my fucking flag. He wasn’t having any of the ryman’s bullshit. I’m so damn proud of you @harrystyles. I’m so proud to be a fan of someone like you. Thank you for tonight. It’s a moment I will never forget. Thank you. Thank you. Thank you."

Harold, you're too good for this world.