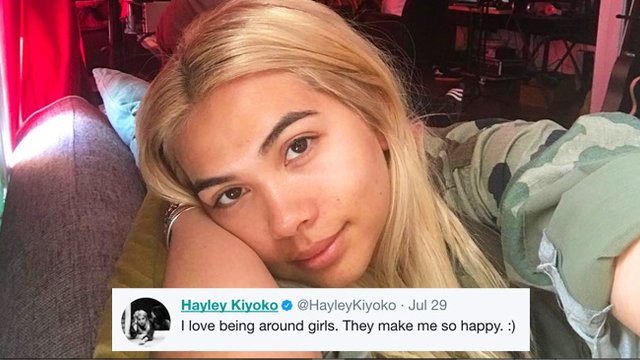 It's no secret that Hayley Kiyoko is a fan of girls. The singer (and sometime-actress) has become the go-to artist for songs about same-sex relationships from a woman's perspective. I mean, she's written a song called 'Girls Like Girls' for god's sake.

In fact, writing from a queer woman's perspective has become Kiyoko's mission statement.

Last year she wrote a moving piece for Paper Magazine about her journey as a musician and as a young woman understanding her sexuality, noting how it took some time before she was confident enough to use female pronouns in her songs and cast women as love interests in her videos. She said the music video for 'Girls like Girls' was like, "I was finally telling my story for the first time."

Fast forward to this weekend and Hayley decided to reiterate her great love for women on Twitter and the tweets went completely viral - with one of them racking up over 27k retweets! - and it's not hard to see why.

This will be probably be the most wholesome tweet you'll read all year.

I love being around girls. They make me so happy. :)

Girls are just so pretty. I'm just like. THANK YOU LORD for blessing my day. Sigh.

U mean girls like you are so pretty because yesss! I'm just like THANK YOU LORD for blessing my day with Hayley's beautifulness pic.twitter.com/2qnZWWs6Km

this is the most wonderful thing i've ever read, i love you. xx

Honestly, we need more PSA's like this in our lives. Go tell all your fave women how great you think they are RIGHT NOW! Oh, and don't forget to listen to Hayley's latest song 'Sleepover'. It's a certified bop.