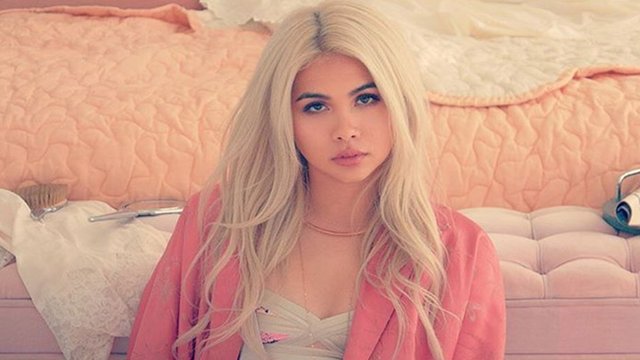 "That was the first time I realised I liked girls"

Hayley Kiyoko has written an inspiring letter in Paper Mag to her fans about opening up about her sexuality and wanting to be a role model for LGBTQ youth.

Hayley is a rare example of a pop artist who writes music that is explicitly queer. It has lead Hayley to be revered amongst her legions of followers as a bit of a gay idol, many of whom lovingly refer to her as 'queen of gays' and 'Gayley Kioyoko' on the many tumblr posts and memes posted in her honour.

Hayley spoke about the inspiration behind writing 'Girls Like Girls'. After feeling frustrated that her music wasn't connecting in the way she wanted, her collaborator Lily May Young asked Hayley what she was afraid to sing about. It lead Hayley to focussed on her use of gender pronouns in her songs.

"I told Lily that I always say “you" and “them" and never the pronoun “her" in all my songs because I was afraid it wouldn't connect. We talked more about concepts and my experiences, and how I loved the idea of stealing another guy's girl because that was always a fantasy of mine. Growing up, everything I did was always about girls. I took dance because of girls. I got involved in student council because of girls. Not that I ever expected any of them to like me back, but I just felt comforted being around them, even if I could never date them. So there we were. The song 'Girls like Girls' was born."

Hayley also revealed the importance of the Girls Like Girls video in telling her story. Hayley says people connected to it addresses the sadness and longing of having a crush, which is uniquely complex for LGBTQ people the rejection could be tied up with your gender or sexual orientation.

"I'd fall in love with girls who would never give me the time of day, or if they would, they had no idea I had other intentions. I had my heart broken over and over again; I never felt good enough. My life was led by these crushes as far back as first grade, when I had a crush on my teacher. That was the first time I realized I liked girls."

Having worked through those feelings of rejection and isolation over many years, Hayley hopes her music will help fans feel confident while they are still young, not years later as an adult.

"I strive to inspire hope through human compassion and through music. Hope leads me through my lyrics, stories, and melodies. You must continue on, and know in your heart you are not alone, and have confidence that love will find its way back to you."

As we wrote last week, Hayley Kiyoko's music and her actual existence in 2016 has been a breath of fresh air. We can't wait for that new album in 2017!