Why The Internet Thinks Justin Bieber Is A Shapeshifting Lizard Person 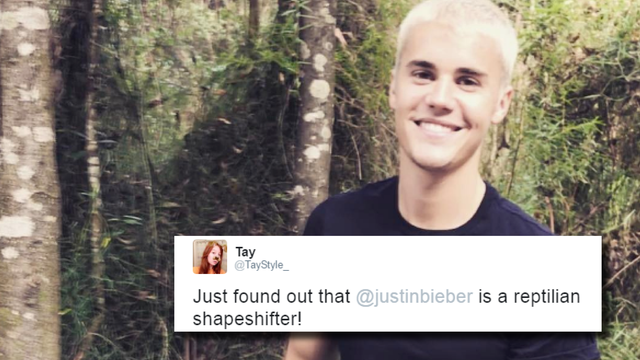 These conspiracy theories are getting wild.

Hi, welcome to March 2017, a time in our history where people are freely asking the question "is Justin Bieber a reptilian shapeshifter?" If ever there was a case for the multi-verse theory, I'd say it's entirely plausible we've found ourselves in the dark timeline.

An alleged screenshot of an alleged story about a shapeshifting lizard named Justin Bieber has been making the rounds on the internet.

The editor of Perth Now says they did not run that story.

The alleged headline of the alleged story was that "Hundreds of fans claim they saw Justin Bieber turn into a giant reptile." This is probably a photoshop job or, at the very most, a rogue weekend editor who has been relieved of their duties.

This weird story claims that Bieber kept turning into a lizard (maybe like a flickering television?) and everyone who saw this display was deeply distressed.

Let's unpack this conspiracy, shall we?

Justin Bieber has been traveling down under for the Australian leg of his Purpose tour. According to this weird website, when Bieber arrived at Perth airport, he was spotted transforming into a massive reptilian creature.

I'm going to go on record as saying that Bieber is most likely not a reptilian shapeshifter, but it never hurts to...consider it.

do i believe that justin bieber is a shapeshifter? yes. for three years i've believed.

This just in: Justin Bieber's a reptilian shapeshifter Pass it on

Strangely enough, this theory has been around for a while. A quick consultation of Twitter will prove that people have been chewing on this one for a while.

Okay, so what's the verdict? Is Justin Bieber a shapeshifting lizard person?

No. Why is the internet so weird? Do ya'll ever sleep?