Here's what Justin Bieber posted. Here's why you shouldn't make fun of him for it.

In early 2016, Justin Bieber admitted that he had been taking ADHD (Attention Deficit Hyperactivity Disorder) medication for a year prior. He also admitted that he believed Adderall, the drug used to treat ADHD, was giving him "anxiety". "I think I'm about to get off of it because I feel like it's giving me anxiety," Bieber told GQ for their March 2016 issue.

It's fairly obvious that Justin Bieber doesn't make things entirely easy for himself. People often have to dig deep within themselves to find sympathy for the the 22 year old privileged pop star and that, often times, has a lot to do with his behaviour. Sometimes the cloud of contempt surrounding the Biebs is so thick, that it becomes easy to forget Justin is a real person.

Even though Justin has been revealing so much about what's happening in his health life (Justin also recently divulged that meet and greets were depressing him), his latest work of art still comes across as an odd Bieber moment...unless you have context.

"I colored this. its dope Cuz I actually sat down for 30 min and finished I never can sit still for that long so it's an accomplishment, yes this took me 30 minutes haha I know I suck Don't judge me".

There are so many levels to this thing. Firstly, yes the photo is a bit... *gestures vaguely* and yes Justin Bieber owns an adult coloring book (because of course he does). But Justin is admitting a couple of important things.

He has ADHD which affects his ability to stay in one place and complete tasks. And he's proud of the photo he coloured in, which tells us that his ADHD must be a huge part of his life at the moment.

Well, the reaction to Justin's NSFW colouring book has been a mixed bag.

OKAY, admittedly it's all a bit...*gestures vaguely* but I really hope we're at the point where we can get past making fun of someone for trying an alternative form of stress relief. Adult coloring therapy is being touted as the latest non-chemical method for addressing stress and anxiety. That, and art therapy, have been steadily rising as effective stress and anxiety treatments for behavioral disorders.

Justin has been giving us hints he has been dealing with something anxiety related for a few months now. And, since fans are so eager to know about his entire life, they should be happy Justin shared this tidbit, however juvenile it may seem.

Come on, ya'll. Yes this porn-ish colouring book is a bit *gestures vaguely* but the Biebs acknowledging that it has been difficult for him to focus, and then sharing his progress is a cool moment in celebrity anxiety/stress/behavioral discourse. 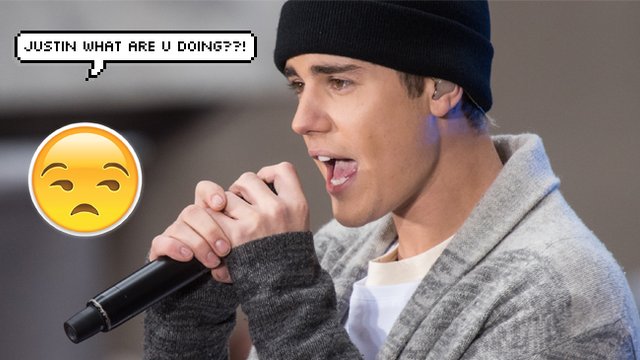