WATCH: Justin Bieber Tells Fan "You Make Me Sick" After She Asks For A Photo 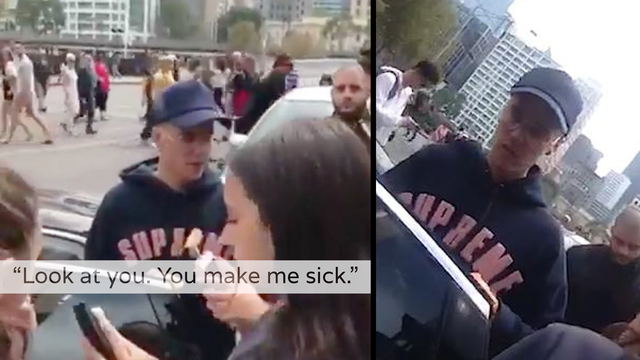 The Australian trip is going well then?

Justin Bieber is famous but he's not happy about it.

He's spent the last year or so avoiding his fans, despite the release of 2015's Purpose. It's become painfully obvious that things between Bieber and his Beliebers have become strained, and new video of a tense interaction in Australia is even more proof of that.

A 20-year-old fan in Melbourne Australia was left "bawling her eyes out" after being scolded by Justin Bieber over a photo.

Sabah Helal says that when she asked Bieber for a picture the pop star told her, "You're invading my privacy, I don't want a photo. Look at you, you make me sick."

Sabah's mother told the Herald Sun that her daughter was so humiliated that she will never see Bieber again in concert.

Bieber has previously said he will not take photos with fans because it makes him feel like a "zoo animal".

"I realize people will be disappointed but I don't owe anybody a picture," wrote Bieber in 2016. "People who say 'But I bought [your] album' know that you got my album and you got what you paid for, AN ALBUM! It does not say in fine print whenever you see me you also get a photo."

To be fair to Bieber, the video footage does not show the behaviour that led to the star's comments. There is always the possibility of provocation, especially when it comes to eager fans.

While Bieber is entitled to privacy, his comments aren't going over well online.

The first 2 things i saw on my timeline today:
-Justin Bieber saying to a fan "you make me sick"
-Adele kissing the hand of a fan

justin bieber to his fans: you make me sick

his fans: wtf he's only human it's ok to make mistakes leave him alone

Headline: Justin Bieber tells "You make me sick" to fans
me: pic.twitter.com/U0mJAkmCSI

It's entirely possible that Bieber was just in a bad mood but it doesn't look great.