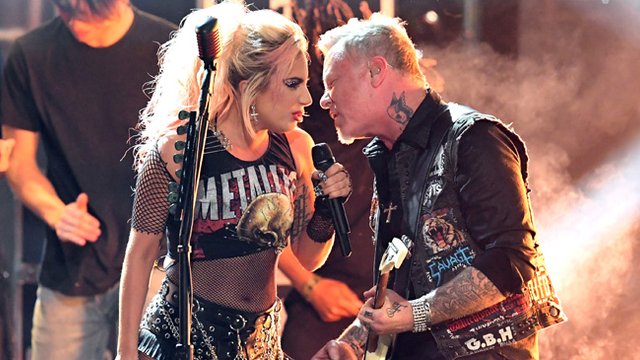 Stop whatever you're doing right now and watch this.

On paper, Lady Gaga and Metallica were scheduled performance at the Grammy's tonight (12 Feb) might look weird and, to be fair, it kinda was. But that didn't stop it being 100% awesome.

Their duet might not actually be as random as some people think. Lady Gaga has often spoken about her love for metal and heavy rock. She used to perform in a Led Zeppelin tribute band before she was famous and she cited Iron Maiden as a big influence on her Born This Way album.

Performing Metallica's "Moth Into Flame", taken from the band's latest album, Hardwired… To Self-Destruct, Gaga literally gave it her all, even at one point crowd surfing into the crowd.

Lady Gaga CROWDSURFING during her performance of #MothIntoFlame with Metallica at the #GRAMMYs! pic.twitter.com/AZngc6YRCX

After this performance, honestly, we're totally down for a Gaga metal album. Someone make this happen, please? Watch Lady Gaga and Metallica tear the Grammy Awards a new one below: