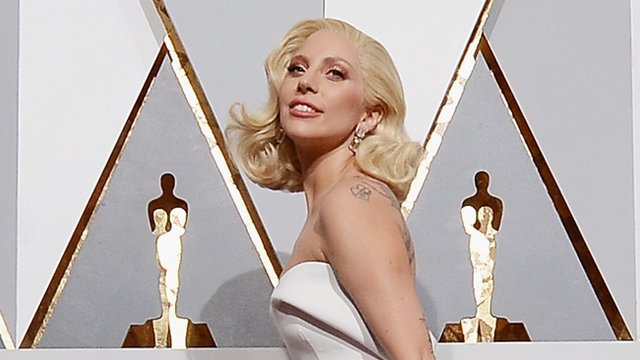 In which Gaga obliterates the Oscars and has the time of her damn life.

59 days into 2016 and Lady Gaga is still number one. In case you didn't catch last night's Oscars Ceremony, The Countess absolutely obliterated the minds and captured the hearts of every single person sat in the theatre, and had an absolute BLAST while doing it.

First of all, she rocked up to the red carpet looking GLAM AF.

Second... she took to Snapchat to share a few behind the scenes moments - including a chance encounter with C3PO.

Third - she shared a quick smooch with R2D2! #GagaForReysMum

After being introduced by Vice President Joe Biden, she then took to the stage to perform 'Til It Happens To You' from the documentary The Hunting Ground...

Where she along with 50 survivors of sexual abuse, both male and female, made one of the night's most powerful statements.

CUT TO: Everyone at home, in front of their laptops and TV screens.

Shortly after that, she was viciously robbed of lost the Oscar to Sam Smith's 'Writings On The Wall' with such grace and class, we literally couldn't even muster a 'YAAAS GAGA' from the puddle of tears we were still lying in.

We're not gonna lie - we're kind of bummed that Gaga didn't get to Level 2 on the #EGOT ladder of dreams but last night, she proved why 2016 is still on track to be her year. In short, Stefani Joanne Angelina Germanotta made history, and slayed the f--- out of us while doing it.

Watch her spine-tingling performance below.

Watch Lady Gaga perform Til It Happens to you at the #Oscars here https://t.co/ptBYEAIKqq