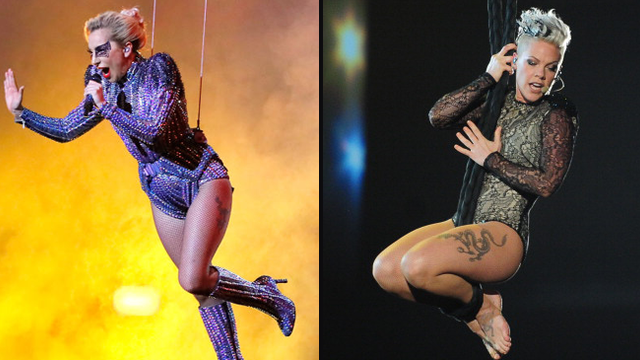 For the record: Let's squash this before it even has a chance to be a thing...

Unless you've been living under a rock, you'll have seen that incredible Lady Gaga concert that aired live on TV on Sunday night (Feb 5). It was very generous of her to let two groups of grown men throw a ball around either side of her big gig, wasn't it?

It even had her flying into the stadium in a hardness, throwing some aerial stunts into the mix.

But not everyone was crazy about it. In fact, many people on Twitter accused her of swiping the acro-vibes from Pink who is infamous for her breathtaking aerial displays at her concerts.

I can’t believe Lady Gaga paid tribute to Pink during her halftime show.

But Pink wasn't having ANY of it. In fact, she watched Lady Gaga's performance and loved it so she took to Instagram to put the comparisons to bed once and for all:

Contrary to popular beliefs, Pink did not invent acrobatics and aerial stunts as she points out herself in her note. She also points out that we should be beyond pitting and comparing the incredible accomplishments of two successful females against each other and focus on the things that actually matter...

Like the fact that Spongebob did it first. LOL jk, there's room for everyone to fight the patriarchy, stand up for basic human rights and try their hand at aerial stunts together, ok?

Who did it best?
Retweet for Spongebob
Favorite for Lady Gaga pic.twitter.com/3qnItGKkBI