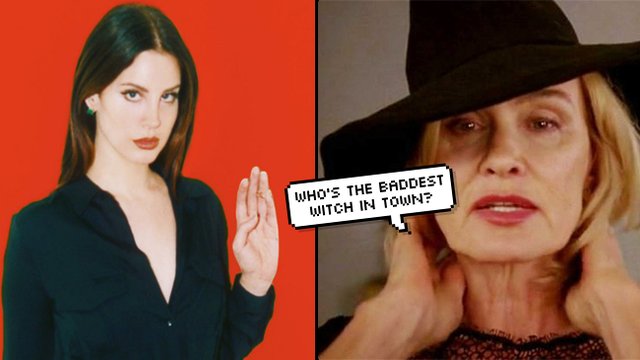 No, we're not joking.

Lana Del Rey has revealed that, despite her appearance as the world's most elusive songstress, she is, in fact, a witch. Seriously.

Lana recently sent out a mysterious tweet with a series of dates on it and an instruction for fans to find the "ingredients' online:

Ingredients can b found online
pic.twitter.com/PsjNpIODZE

But what does it all mean?

Well, it turns out the dates Lana is referring to involve 'the moon phase', each date having a 'waning crescent moon', thought to represent a time to de-stress and dispel all negative vibes in your life.

And you know what would be great to help us all de-stress?

But there is an even WILDER connection to these dates that has got some fans guessing about Lana's interest in the world of sorcery, as self-proclaimed witches around the world will be using the 'waning crescent moon' to cast a series of spells against US president Donald Trump.

Or maybe any new music that arrives on those dates will feature lyrics inspired by the chant the witches have written for the spell:

Bind him so that he shall not break our polity
Usurp our liberty
Or fill our minds with hate, confusion, fear, or despair
And bind, too,
All those who enable his wickedness
And those whose mouths speak his poisonous lies.

Time will tell we guess.

Lana's new single 'Love' is out now with an album hopefully following soon. We'll bring you all the details as we get them.