Little Mix and Nicki Minaj have no time for your double standards...

Little Mix are killing it right now. After spending the past year working on their new album, the girls are finally ready to release it. LM5 comes out on November 16th and the band has already sold out shows for the UK leg of their LM5 tour. Not only that but Jesy, Jade Leigh-Anne and Perrie have also put out the project's empowering lead single 'Woman Like Me' featuring the one and only Nicki Minaj.

That's not all though. Today Little Mix dropped the highly anticipated 'Woman Like Me' music video and it's nothing short of incredible. Not only is it all kinds of fun to watch but it's also one of their best videos to date. First things first, the fashion is major (the girls are serving multiple looks), then there's the staging (the chairography is magnificent) and last but not least the concept is major.

What is the meaning of the 'Woman Like Me' video?

The visual opens with the girls being shipped off to a massive finishing school in England. Jesy, Jade, Leigh-Anne and Perrie then take various lessons to be more lady-like. However, even though Little Mix appear to take the classes seriously at first, they soon fight against them. By the time the video ends, the girls are just being themselves (with the help of Nicki Minaj) and making the finishing school their own.

Opening up about the video on Instagram, Jade wrote: "Say 👋🏽🖕🏽👋🏽 to the stereotypes of how women should behave. She then added: WARNING ⚠️ @littlemix are wearing leotards in parts of this video. The exposure of thigh and their ability to dance comfortably in their chosen choice of clothing may offend some." Amazing.

Unsurprisingly, the visual is filled with easter eggs and hidden messages. Ever since it came out at midnight fans have been watching on repeat to find out all of the secret meanings in it. With that in mind, we have gathered them all in one place for you. So without further ado, here they are.

1. The opening references how women are punished for being themselves.

The first shot we see is of the girls stuck in a truck similar to the ones in which people are held before being taken to prison. It is almost as if Little Mix are being held captive because they aren't 'proper' ladies.

2. The girls are all in leotards which is a reference to the outfits they've been criticised for wearing in the past.

Mixers know that any time the girls perform they get criticised for what they wear. Apparently leotards are too 'inappropriate' for some. Donning them in the opening of the video is a big FU to their haters.

3. The chairography is a statement.

It may seem at first like the girls doing chairography is just a typical music video antic. However, considering that they are in a finishing school, where this sort of dancing would usually be frowned upon, it's a major flex.

4. A woman's worth can't be measured.

One of the most striking scenes is the one in which Little Mix literally catwalk down a massive ruler. In it, they are literally stomping on any notions that you can measure or weigh a woman's worth.

5. The books are a direct reference to etiquette classes.

Back in the day, and still in some cases, women were expected to take classes in how to behave properly. One of these involved balancing books on your head to improve your posture. Little Mix put their own twist on it.

Men aren't called out for their clothing or behaviour or anything in the same way that women are. The scales allude to the fact that equality between the sexes doesn't exist yet and Little Mix want to balance the scales.

Throughout her career, Nicki Minaj has called out the double standards that she faces in the industry as a curvaceous, black woman. People dismiss her talent and her art. Here she is proving that she is art on her own terms.

8. Women should not have to fulfil housewife stereotypes.

Each of the girls has their own chore in the video (Perrie is ironing, Jesy is flower arranging, Jade is making tea, Leigh-Anne is vaccuming). Instead of doing the chores they've been tasked with they have fun.

At the start of the video, Little Mix fine dine with empty plates but it then cuts to them scoffing burgers. Women are often criticised for what they eat and how they eat but they shouldn't be. Little Mix show here that they will eat whatever they want, however they want, and no-one can tell them otherwise.

Iconic. What else did you spot?

Leigh-Anne Pinnock announces she is pregnant with first baby 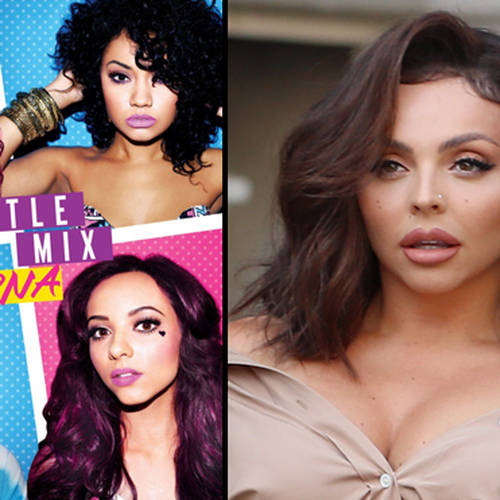