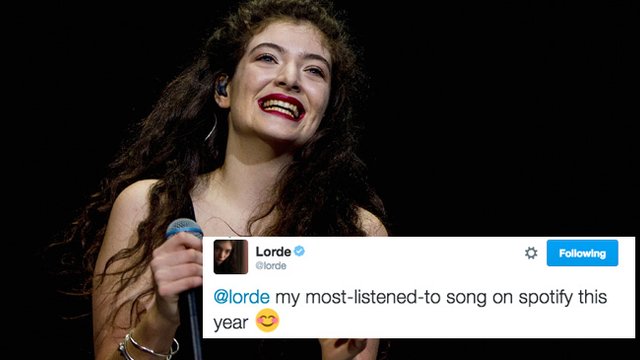 The 'Royals' singer is a new fan of one of your favourite bands...

Lorde has revealed her most listened to song on Spotify this year and it is one of our absolute favourites!

Spotify has been allowing users to view a playlist of their most played tracks of 2016 and Lorde took to Twitter to reveal her number 1 pick.

It's The 1975's truly excellent single 'Somebody Else'!

i'll admit i haven't listened to very much of this band's music but holy shit this is a perfect classic forever song pic.twitter.com/gEMj92Dnea

"perfect, classic, forever". Yeah, that pretty much sums it up!

Matty responded in kind with his token Twitter catchphrase...

Lorde is expected to drop her long awaited second album in 2017, sharing pics and news from the studio throughout the year. She returned to the stage a couple of times this year, paying tribute to the late David Bowie at the Brit Awards and making a guest appearance during Disclosure's set at Coachella.

The 1975 meanwhile will top off their incredible year with a HUGE UK tour beginning this week and including two shows at London's O2 arena.