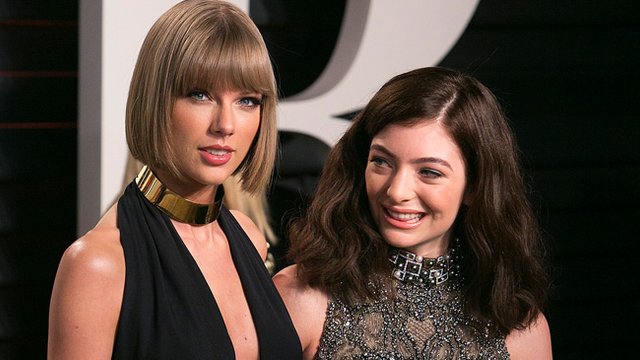 We all know Lorde and Taylor Swift are best mates. In fact, the whole world seems to be obsessed with their friendship, so much so Lorde couldn't seem to escape questions about Swifty when she was promoting her latest album Melodrama. We guess that's just par for the course when you're friends with one of the most famous people in the world.

More recently, fans started speculating that Taylor might've had a hand in writing some tracks on Melodrama. One post by a Lorde fan account on Instagram suggested that Taylor co-ghost-wrote "Supercut" as well as an unreleased track called "Never Again" with Lorde and Jack Antonoff.

Now, this isn't a totally crazy idea. Jack Antonoff (from Bleachers) produced most of Melodrama and worked on Taylor's 1989 album too, so it's entirely possible that at some point they could both be in the studio with Jack or exchanging ideas for fun. Taylor also has history with secret writing credits. She was famously outed last year as the co-writer behind her ex-boyfriend Calvin Harris' single 'This Is What You Came For'.

That said, Lorde is known to be very protective over writing her own material and only allows a selected few into her creative circle, so it would be a bit odd for her to start asking friends to write with her. And, in that spirit, Lorde herself responded to the Instagram post to deny Taylor's involvement. "Just me n j :-)", she clarified (the 'j' standing for Jack Antonoff) before adding, "I have never written a song called never again lol".

Way to shit all over our dreams, Ella! We're joking, obviously, but we wouldn't mind seeing a musical hook up between the two besties. Based on this debacle, however, we won't hold our breath.