Things are getting hella real.

We know that Melanie Martinez is not afraid to speak her mind when it comes to all things social media.

The singer has already made some valid points about celebrity culture and the dehumanisation of popstars and celebrities by online mediums after her purse was stolen after a show and now she's back.

The whole drama started when Melanie tweeted the following...

Doesn't matter how much money you put behind some1, if the music isn't good and they aren't a real artist.. people will catch on..

In fact, Halsey didn't help the matter by sub-tweeting this...

Jealousy in the air tonight, I can tell. I will never understand that but, oh well.

It seemed that Twitter was ready for the the 2k15 version of Britney vs. Christina, so started pitting the two against each other.

Wait?! Have Panic! At This Disco Just Announced A New Album?

Melanie Martinez Is a Literal Goddess And We Worship Her

However, Melanie has taken to her tumblr to clarify exactly what she was talking about and she's not holding back.

"Disappointed/shocked with how many people’s imaginations went flying through the roof when I tweeted a simple statement the other day," she wrote. "I wasn’t talking about anyone specific. I just have been realizing a lot of things and felt the need to state that simple fact."

Continuing, she added: "Money can’t create an artist. And knowing that, motivates me to stay focused on creating art and stop getting so consumed with the numbers... It’s so easy to get lost in all the bullshit and I always need to keep my head on straight and remind myself that the art will speak for itself in the end."

Finally, she called out those people trying to pit her and Halsey against each other.

"[F]or anyone to assume a tweet that general is about halsey or any artist for that matter is very immature and false," she stated. "Please stop bullying eachother over something that isn’t even a real thing."

Seriously though, Melanie Martinez has a point. Just because she said something it doesn't mean that it's related to another artist, or to anyone at all.

Instead what happened is the usual bulls*t where people insist on pitting female artists against each other.

It's 2015, surely after everything that's happened this year we're done trying to create random arguments for the sake of it.

Props to you Melanie. Keep spilling that truth tea. 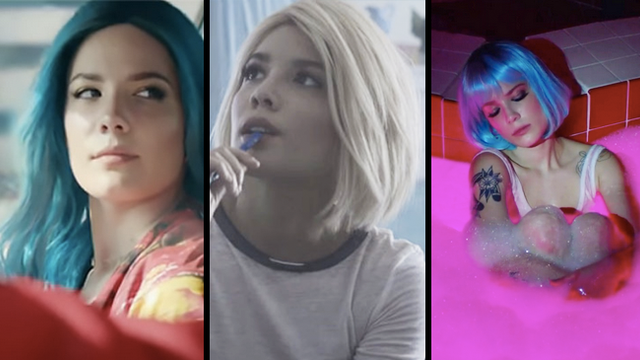 QUIZ: Which Halsey Song Sums Up Your Entire Life?