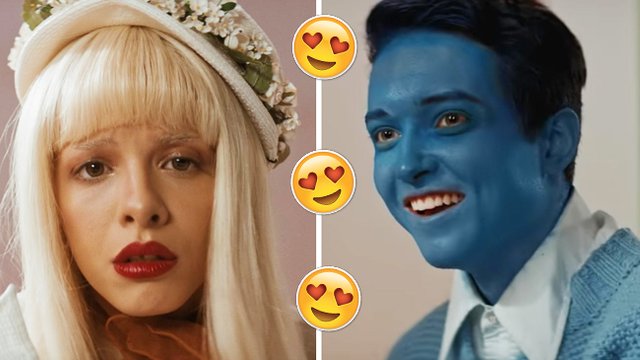 Here's a detail you probably missed about Melanie Martinez's recent 'Pacify Her' video. In support of the LGTBQ community, Melanie asked transgender Youtuber, Lucas Mogerley, to play the part of "blue boy" in the video.

I can finally post a little #bts from Melanie Martinez's music video Pacify Her! Not only was she incredible to work with and a truly genuine, kind person but the shoot itself was so much fun! Everyone go check out the video now if you haven't already!! #melaniemartinez #pacifyher

Lucas, who is 20, revealed in a Q&A on his YouTube channel that he got the role by applying to a casting call (he's not a personal friend of Melanie, as some people believed). Apparently nobody on set knew that he was trans but everybody was cool once he told them. He added that Melanie was "cool" to work with and he had "some really interesting conversation with her". Jealous!

Not-important-but-kinda-very-important music video fact: they had a dog on set named Lucas and he's the cutest thing we've ever seen. Should have got a cameo imo.

Also in the Q&A, Lucas said he knew he was trans for a long time but only started coming out to people when he was 14/15. His family were supportive, even if they didn't quite understand at first. "My mum is my best friend, both my parents are really incredible", he said. "I've really lucked-out on the family front."

Lucas is fast becoming an outspoken member of the trans community and has documented his journey as a trans person on his social media account.

Happy trans awareness week! I will never be ashamed of the scars on my chest or the journey I've accomplished and am still on. We are here and we are queer! . . . . #transisbeautiful #transgender #transweek #transweek16 #ftm #transman #transboy #lgbt #lgbtqia #lgbtq #pride #transpride

We think it's so cool that Lucas is being such a positive role model for young trans people - he's an inspiration to all of us! And well done Melanie for supporting trans people and the wider LGBT community in this way. The more artists that help represent the LGBT community, the better!