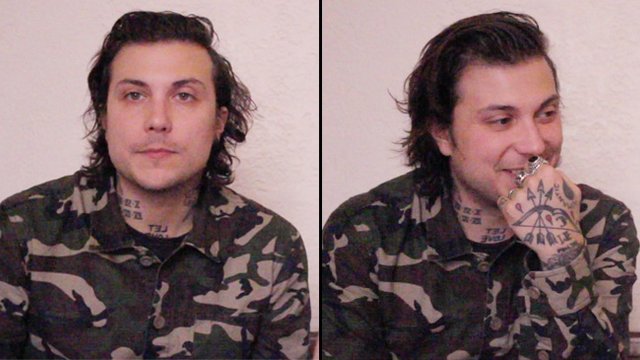 We talk new music, touring and life after the bus accident as Frank Iero goes solo.

Frank Iero has opened up about his bus accident, life after MCR and his personal and eclectic new album in an exclusive interview with PopBuzz.

Frank was in the UK to support Taking Back Sunday on their UK tour and we caught up with him backstage at London's Kentish Town Forum as he promotes the release of Parachutes, his first full-length record under the name Frank Iero and The Patience.

Plus, we took the time to chat through his relationship with his former bandmates from My Chemical Romance, even revealing the contents of their secret group chat conversations:

Frank was involved in a bus accident while on tour in Australia last year just as the new album was about to drop, with fans across the world sending out their support to him on social media.

He reflected on how the incident has affected his work moving forward and how it took time to get back into the swing of touring again:

Frank continues his tour with Taking Back Sunday before heading back to the US for some headline shows later this year.

Watch our full interview with Frank Iero in London below: