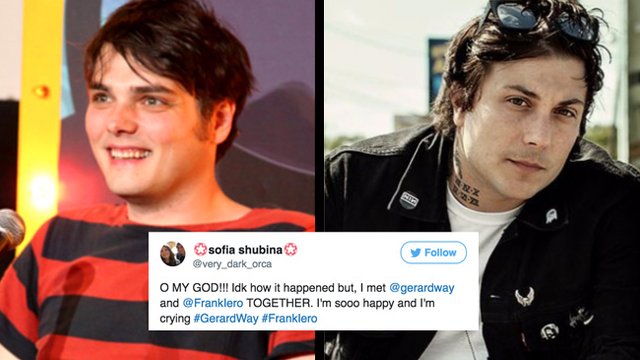 Does this mean what we *think* this means?

My Chemical Romance fans went into a complete meltdown yesterday after photos of Gerard Way and Frank Iero were spotted taking photos with a fan in Leeds.

A mini reunion...it brings a tear to our eyes!

You're probably wondering what the bloody hell is going on. Well, Gerard Way was making a rare UK appearance at the Thought Bubble comic art festival in the UK city to promote his The Umbrella Academy comic series. Turns out, Frank Iero (and his dashing new haircut) was also in town with his band The Patience on their UK tour, so the two decided to meet for a quick catch up and one lucky fan got an opportunity to get a photo with both of them.

As it happens, we asked Gerard about his old pal Frank while he was at Thought Bubble in our interview with the former MCR frontman. Earlier in the year Frank told us that the former members of MCR have a group chat but don't have a name for it, so we couldn't help but ask whether they had come up with a group chat name since then. Gerard had bad news for us, though. "I'm 40 now so I had no idea you could name a group text chat" he said. "I'm pretty sure none of us knew that. It's just our names at the top." Alas...

We wonder if Gerard and Frank used the group chat to hook up at Thought Bubble? Perhaps! The real question is whether they discussed writing any new MCR material? We sure as hell hope so! [H/T Alt Press]

Read our full interview with Gerard Way over here and you can also watch our chat with Frank Iero below.