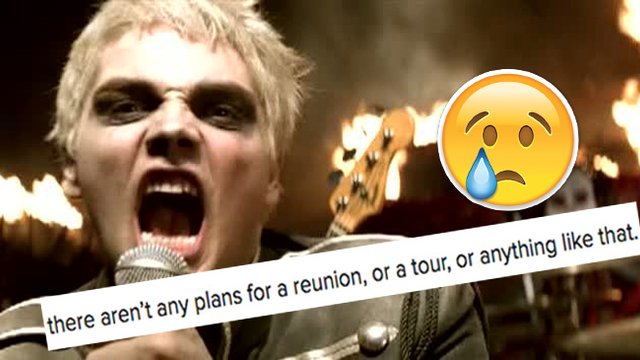 Gerard Way has finally put to rest the continuing rumours about a possible My Chemical Romance reunion in celebration of the anniversary of The Black Parade.

Speaking to Buzzfeed, Gerard made clear that, while there are no plans for the band to get back together, they all remain good friends and are incredibly proud of what they achieved together.

You know, there aren’t any plans for a reunion, or a tour, or anything like that. I guess what is just really cool, you know, the relationships between the people in the band are really solid. I think everybody misses each other, and we definitely miss playing with each other — but at the same time, everybody is really happy with their lives. And we’re able to recognize that My Chemical Romance was this one period, this moment in time that we’re really proud of. But I think the most important thing is that everybody is happy creating, and doing what they want to do, and have really great relationships with each other.

Earlier this year, the band released The Black Parade 10th anniversary edition featuring bonus tracks and demos, leading to speculation that some sort of reunion could follow.

In terms of solo projects, Gerard has just released a new line of graphic novels, Ray and Mikey have both dropped solo albums as has Frank who is in recovery from the bus crash he suffered in Australia last month.

So, no sign of new MCR yet kids but, hey, ya never know. Maybe when they're 60, they could head out like The Rolling Stones or something. Either way, their memory will carry on (get it? Like the song lyrics? Fine, suit yourself, we thought it was funny).