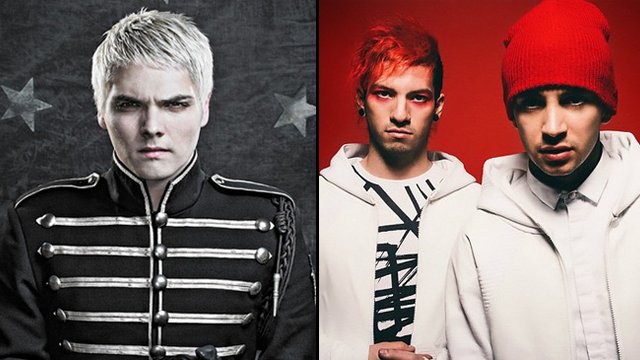 Tyler and Josh recorded a new version of 'The Black Parade' album track in 2016 for its tenth anniversary.

Gerard Way has praised Twenty One Pilots' cover of 'Cancer' in an exclusive new interview with PopBuzz.

Tyler and Josh recorded their cover of the My Chemical Romance song, taken from the album The Black Parade, for a tenth anniversary compilation for RockSound. They have since performed it live countless times as well as releasing it as a standalone single on iTunes.

When we asked Gerard if he had heard their take on the song, he revealed just how delighted he had been with the new version:

"Gerard Way: Oh yeah. I did hear that one, it was great. I was really impressed. I didn't know what to expect and I was surprised by what I heard. Because there's a bit of rejuggling of parts and I was like 'wow, this almost sounds like a remix' but it's a cover by way of this, kind of, rearrangement and I was really impressed with it. I like that band anyway, I like the sound of that band. I think what they do is really interesting. So, I was psyched to hear that cover.

PopBuzz: I think there's a clear line of influence with those guys too, they are definitely taking on that mantle you left behind, experimenting with similar themes and lots of different musical styles.

Gerard Way: Yeah, I think so too. They're a good band. I was really psyched about that. I was into it."

The musician and comic writer was in the UK for the Thought Bubble festival when we caught up with him to talk through his career, from MCR to his upcoming Netflix adaptation of The Umbrella Academy.

Check out our full interview here.