MCR Revealed They Have A Group Chat & It's Already A Meme 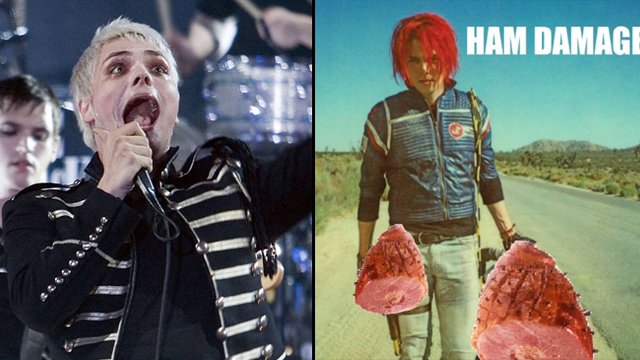 The former members of My Chemical Romance have a group text chat and ever since the news broke, their fans have been seriously freaking out and begging for more details.

The group chat first came to light during our exclusive PopBuzz interview with the band's guitarist Frank Iero, backstage in London ahead of his supporting slot on the Taking Back Sunday tour.

Pretty quickly, word spread around the fandom that the boys are still in touch, talking about things as silly as a ham delivery service called "Ham Damage". Yes, really.

And then, of course, other conversation ideas began flooding in!

the mcr groupchat is probably just filled with barbecue recipes and song recommendations. with the occasional weird shit from gerard

imagine the group chat the mcr boys have pic.twitter.com/FAjpndQbSE

does frank send memes to the mcr group chat

All truly excellent topics right there and at least a couple are probably scarily accurate.

Then, of course, the memes began...

Me vs me after I find out MCR has a group chat pic.twitter.com/h3KLrn5Dfy

where were you on february 17, 2017 when frank iero revealed that mcr has a group chat

Also me climbing out of my emo hell: they have a fucking group chat pic.twitter.com/yxo7fORBYy

Basically, everyone was very excited.

Someone even developed the perfect advertising for their new ham delivery company:

Of course, we still have a few questions for Frank and the boys - what's the name of the chat? How often are you on there? Is everyone involved or do you have any sneaky sidechats to talk smack about each other? Do you play any games together like on Facebook Messenger? And if so, who is winning?

Frank continues on tour with Taking Back Sunday before heading back to the US for some headline dates with his new band Frank Iero and The Patience. His new album Parachutes is available now.

Watch our full interview with Frank below: