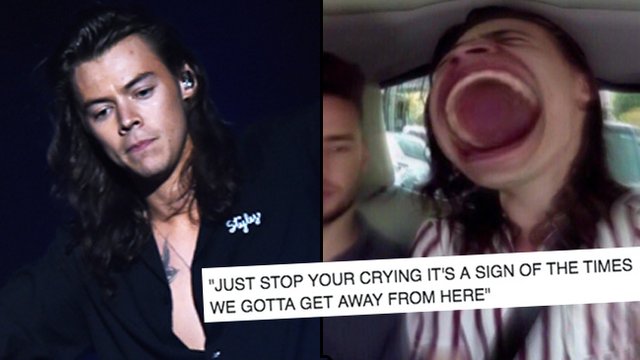 The debut solo single is upon us and directioners are fully here for it...

Well, you waited long enough and now, Harry Styles, the artist formerly known as Harry from One Direction, has returned with his debut solo single 'Sign Of The Times'.

As you are probably already aware, it is a spacey, mid-tempo ballad in the vein of David Bowie with a forthcoming video set to feature Hazza flying over cliffs and rocks out to sea like he's off to save Gibraltar or something.

And, predictably, the internet has gone into complete meltdown ever since the track dropped, as Directioners and Harry stans alike have headed online to let all their feelings out.

Check out a few of our favourite breakdowns from around the internet below:

harry: JUST STOP YOUR CRYING ITS A SIGN OF THE TIMES
us, intellectuals: pic.twitter.com/dkcMRFhqyX

me after hearing Sign Of The Times the first time and pretending to know the lyrics pic.twitter.com/JsZOFK06rF

SIGN OF THE TIMES IS A LIGHTERS OUT IN THE STADIUM KIND OF SONG CAN YOU BELIEVE HOW MIND-BLOWING AND SURREAL IT WILL BE WHEN WE GET IT LIVE pic.twitter.com/7WVrphpRfv

SIGN OF THE TIMES THE MOST DARING AND WELL-DELIVERED DEBUT SINGLE OF THE DECADE pic.twitter.com/oy9wNTTcpn

Me pretending I know the lyrics to Sign Of The Times after listening for 30 seconds pic.twitter.com/pbyGL7bWLJ

#SignOfTheTimes
who's gonna win a grammy for sign of the times? pic.twitter.com/fc4YI82tp4

Harry: Isn't she lovely
Me: *blinks twice*
Harry: Just Stop your Crying,It's a sign of the times#signofthetimes #HarryStyles pic.twitter.com/L7WSrNY1jy

"JUST STOP YOUR CRYING IT'S A SIGN OF THE TIMES WE GOTTA GET AWAY FROM HERE" pic.twitter.com/3hVGaib88I